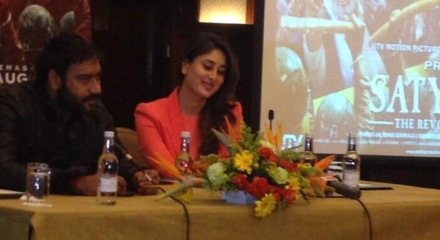 Ajay Devgn and Kareena Kapoor, interacted with media at the London launch of the trailer for their highly-anticipated, forthcoming film, Satyagraha, on Wednesday 26th June at Taj, Buckingham Gate, St James Park, London. The Trailer Launch and proceeding Press Conference was hosted by UTV Motion Pictures and Prakash Jha Productions.

Speaking at the London Press Conference, Ajay Devgn commented, "Prakash has found a great balance between engaging the audience and, in spite of that, trying to say something which is very current and social. It is the film that works and every character has to work, and I think every character is very well balanced and it has come across well."

In relation to her role in Satyagraha, Kareena Kapoor said, "I have always wanted to work with Prakash-ji, and the role that he’s offered me this time is the role of a journalist, which I haven’t really essayed before. It’s a very strong-headed but sensitive character and I couldn’t say no. And, of course, being part of a film which is socially very relevant right now in our country is also a great honour." Adding about her character in the film, she elaborated, "Playing the part of a journalist excited me. Their personalities are in some ways similar to mine because I am headstrong and quite sure about what I want. As a director’s actress, I didn’t really prepare as such for the role and I completely followed Prakash-ji’s direction."