Desi-Box at the Ra.One London Premiere 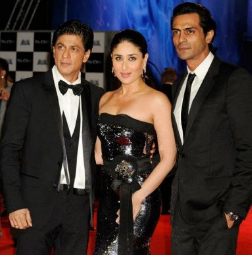 Desi-Box at the Ra.One London Premiere

The Desi-Box team were invited to the London premiere of Bollywood’s most eagerly anticipated film last week; Sharukh Khan’s Ra.One, at the O2.

The premiere was the one of the largest seen in Europe with over 2000 VIP’s invited. The film was shown in all 11 screens at the O2 complex in the cineworld Cinema.

The film which has been in production for the last two years has been named as the most expensive film to date and boasts a visual effects spectacle to rival Hollywood. Packed full of humour, drama, action packed sequences and death- defying stunts, this is one film which raises the bar in Indian Cinema and is not to be missed!

Already making waves at the UK box office, the film has almost accumulated a stupendous £1 million pounds after releasing this Diwali Weekend.

We caught up with the stars of the film at the exclusive red carpet event.

Check out the videos below to see Desi-Box interviewing the star of the film Armaan Verma, Bollywood starlet Shahana Goswami, the Chaamak Challo Bollywood beauty Kareena Kapoor, Ra.One himself Arjun Rampal, the acclaimed director Anubhav Sinha as well as the badshah of Bollywood Shahrukh Khan.