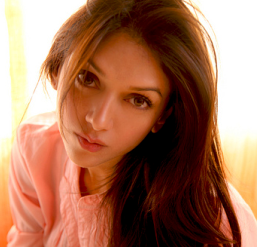 The coming of age story follows the couple’s journey of them experiencing various shades of love across the three romantic cities in the world; London Paris and New York. Directed and written by debutant Anu Menon, the film release on Friday 2nd March 2012.

Below Aditi shared her thoughts with Desi-Box about her magical experience on working on the film and reveals more about her character as well as working with Ali Zafar.

DB: Can you tell us a bit about your character?

Aditi: I play a girl called Lalitha from a place called Chembur in Mumbai. Lalitha has grown up in a traditional home, where education is important. Lalitha has gained a full scholarship and is on her first trip abroad. She has gone to study politics abroad because she wants to change the world! She is an idealistic and earnest girl and although she may be judgemental, she has an innocent and clean heart. She has a chance encounter en route in London she meets Nikhil Chopra. Then it’s a magical connection that forms between them. The connection is special as even though their lives are pulling in different directions, they seek each other out every time. It’s a very strong bond between the two that inevitably develops into love…and I can’t reveal anymore!

DB: How was it working with Ali?

Aditi: It’s a very close nit film with a small unit so we were altogether all the time. The special thing about Ali is that he is a complete artist. As I also sing and dance etc, we bonded a lot on art, music and my philosophies. Ali is also fun with a great sense of humour. I laughed at him like a crazy person because he would constantly crack me so I was entertained constantly. I entertained him too as I believed every little thing he told me and most of the time he was playing pranks on me. I think we had really nice time together. What was important was that we were very comfortable with each other with a good understanding.

DB: The promotions show that you have a very distinct style in the film depending on the cities you are in. Can you tell us more about them?

Aditi: The cities have been chosen for a specific reason because they mirror what the characters are going through. If London is warm, fun and friendly that how we dress in London. Lalitha is very young and innocent in London. She wears jeans and a vest top with a shirt. She has never been abroad; so she is very overdressed with a jacket and a muffler. As she is going abroad for the first time she thinks she has to be dressed for the arctic zone!

Move to Paris where certain things happen in their lives and both have gone a particular path. Lalitha is in a phase where she has already explored, is slightly cynical with a ‘been there done that’ attitude. What was interesting as actor was keeping her innocence alive; her exterior is cool and confident but her core is still innocent. This is why we went for the Parisian short haircut and red lips. She is in slightly edgier clothes; leather jacket, skinny jeans and boots but at same time quite casual.

With New York it is a city that allows you to come into your own and allows you to be whom you want to be. Lalitha has become calmer and more feminine. She has long soft hair and is now wearing glasses which are a contrast to the beginning of the film where she is wearing lenses.

DB: What was your favourite location to shoot in?

Aditi: My favourite location has to be London; it has its own charm to it!

DB: While you were shooting in France did you get to try any of the renowned French cuisine?

Aditi: Absolutely. I had French food everyday while we were shooting. I actually loved snails!

DB: You are a trained classical dancer did you utilise an of your dancing talents in the film?

Aditi: I didn’t get to use Bharatanatyam in the film but I did get to dance .There is a sweet song where Ali is playing  a Church piano and Lalitha is like you can’t misuse it. Ali’s character is a chilled out guy and says that when you listen to the song if you want to dance you can dance. When she dances in that song it is as though she blossoms. I also got to dance in the funky title track in which we had vintage looks; which was fun.

DB: What is your favourite song in the film?

Aditi: Thehree Si Zindag is my favourite as Ali and I have sung it together. It’s like a rock ballad love song that really transports you to a beautiful world.

DB: Did you find the role of Lalitha emotionally draining given the film deals with various shades of love?

Aditi: It was not emotionally draining but hard work and at the same time satisfying. One part which was a little intense was in Paris as those were quite dark scenes.

DB: Being creative individuals did both of you implement any of your creativeness and spontaneous in any form while shooting London Paris New York?

Aditi: Completely. Although the script was bound with very specific dialogues and situations we didn’t change many things around, but gave our suggestions and played out scenes in different way. Acting should be effortless which why acting should be reacting! Acing for the camera should be honest and you should be vulnerable to the camera.

DB: How was it working with first time director Anu Menon?

Aditi: Anu had the film from beginning to end in her mind. She was very open to suggestions and had no ego as a director as she was completely with us. It was a very magical experience. We had a small unit of 35 people and everyone gave their 100% with all honesty.

DB: Can you tell us about any of your upcoming film projects?

Aditi: There are a few film offers and projects that I will be working on soon, but announcements will made in due time.

DB: Any last messages for your UK fans?

Aditi: We have had lots of positive feedback already and I have heard time and again that the trailer looks fresh, chemistry is appealing and that the dialogue is snappy. I want to say thank you for all the support and hope everyone goes and sees the film!