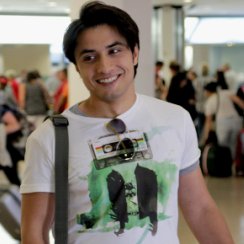 The coming of age story follows the couple’s journey of them experiencing various shades of love across the three romantic cities in the world; London Paris and New York. Directed and written by debutant Anu Menon, the film releases on Friday 2nd March 2012.

Below Ali shares his candid thoughts about the film and his character, balancing composing and acting in the film and missing out on meeting George Clooney!

DB: Congratulations on your recent Stardust award how does it feel to win your first award?

Ali Zafar: It’s an amazing feeling. After working so hard and now I have been actually been awarded for it is excellent and I can’t ask for more.

DB: Can your character Nikhil in the film be described as a hopeless romantic?

Ali Zafar: Yeah he is actually. He is romantic and  he is a little child like at the beginning of the film. This is partly because in the film he is in early twenties and for the first time he is actually going abroad and it’s to London.

DB: What qualities does Lalitha (Aditi Rao Hydari) have in the film that makes Nikhil fall in love with her?

Ali Zafar:She is not like Nikhil but She is not the exact opposite either . Even though they are different from each other , it’s the grey area in the middle somewhere where there is a connection and in this case where Nikhil finds Lalitha interesting. With the other person being different it makes you look at your own self and your  life in a very different manner and I think with the film that is why they are both a made for each other.

DB: What was your favourite location whilst shooting for London Paris New York?

Ali Zafar: My favourite location was London as we spent the maximum amount of time there. We had a great weather throughout with sun shining.

DB: Did you get a chance to try any of the French cuisine whilst shooting the film in Paris?

Ali Zafar: I did. I cant do without it! I actually think they make the best French fries in the world by the way.

DB: Anu Menon, the director of the film had earlier said that throughout the period of your twenties till you get to around thirty is when you explore yourself and finally find who you are. Do you think that is true?

Ali Zafar:I guess it is different for different people. But I think she is right because when you are in your twenties you actually try to find that balance between the world, and who you are going to be and you also feel a wave of various emotions. With a lot of questions being answered and with answers themselves being questioned. I guess you finally  make peace with yourself in your late twenties. A lot of things happen in your twenties for example with Nikhil in the film you seem him transform from a boy to a man. That in it self was a great graph as an actor.

DB: You are known for your creativeness and your love for art. Did you have time to utilise your creative flair whilst shooting?

Ali Zafar:Throughout the film I kept clicking pictures. I couldn’t carry my canvas so I made use of my camera. I have been posting pictures on Twitter which followers can see too. I also keep my I-Pad with me as it has all my drawing software.

DB: Was there much improvisation with your character in the film?

Ali Zafar: I believe you can get away with improvisation. An actors job is to feel the character in their own way. What you bring to the table as an actor is ultimately what separates a good actor from a bad actor as well as what you ad on to it yourself. At the same time I don’t believe you should take anything away from a director. A film is a directors medium, so  even if something is added or subtracted it has to be within that bracket where director is comfortable.

DB: You also composed the music for the entire film. How did you balance composing with acting in the film?

Ali Zafar: It was surreal. Doing all these things together was a lot of hard work. Each song is a world in itself. You have to give proper time, attention and dedication whilst doing everything with sincerity. I also had to make sure I was not burning myself at the same time, as you have to feel good as well as look good. It was very demanding balancing these things but I didn’t mind it as much as I enjoy it.

DB: You have now done three films. How do you embrace a character? Do you switch off as soon as the cameras stop rolling?

Ali Zafar: I don’t believe in the school of though where you completely start living the character in your every day life. I think that once you are done with your character you leave it on set and come back as yourself. In fact, even if I did an emotional scene, as soon as scene finished  I would be myself again.

DB: Being the composer of the film did you  have an pre-conceived ideas of how the music sequences of the film should be shot?

Ali Zafar:Not exactly. I believe that it is the directors and producers call. I just inputted my thoughts with the title track of the music video. I just wanted the song to have a very international feel to it and thought it should be shot and stylised in a certain way.

DB: What is your favourite song of the film?

Ali Zafar:It has to be the title track and the song Thehree Si Zindagi.

DB: We understand that you played a lot of pranks on Aditi whilst on the sets of London Paris New York, and most of the time she believed you. Can you tell us of any incidents?

Ali Zafar: There was one time where she thought I lying but I wasn’t. I was going to Abbey Road studios in London as they were having a small party. The studios are well renowned, as the Beatles and Pink Floyd recorded their albums there. I was going to that party and happened to know that George Clooney was going to be there. I told this to Aditi and she  just started laughing at me. When getting ready for the party Aditi took her time and by the time we got there, they said George Clooney had just left 5 minute ago! She thought I was playing a prank!

DB: Can you tell us about any upcoming films that you are starring in?

Ali Zafar: Chashame Buddoor which is  directed by David Dhawan. We have almost finished with shooting and that will be released late in the summer.

DB: How do you balance a family life with acting?

Ali Zafar: You have to balance everything in this line of work. When with family I believe in spending the best quality time with them to make up for lost time. My family is also very understanding .

DB: Why should your fans watch London Paris New York?

Ali Zafar:We had fun shooting it and hopefully the same fun is shown on screen. I’m sure people coming to see the film will walk away with a smile.