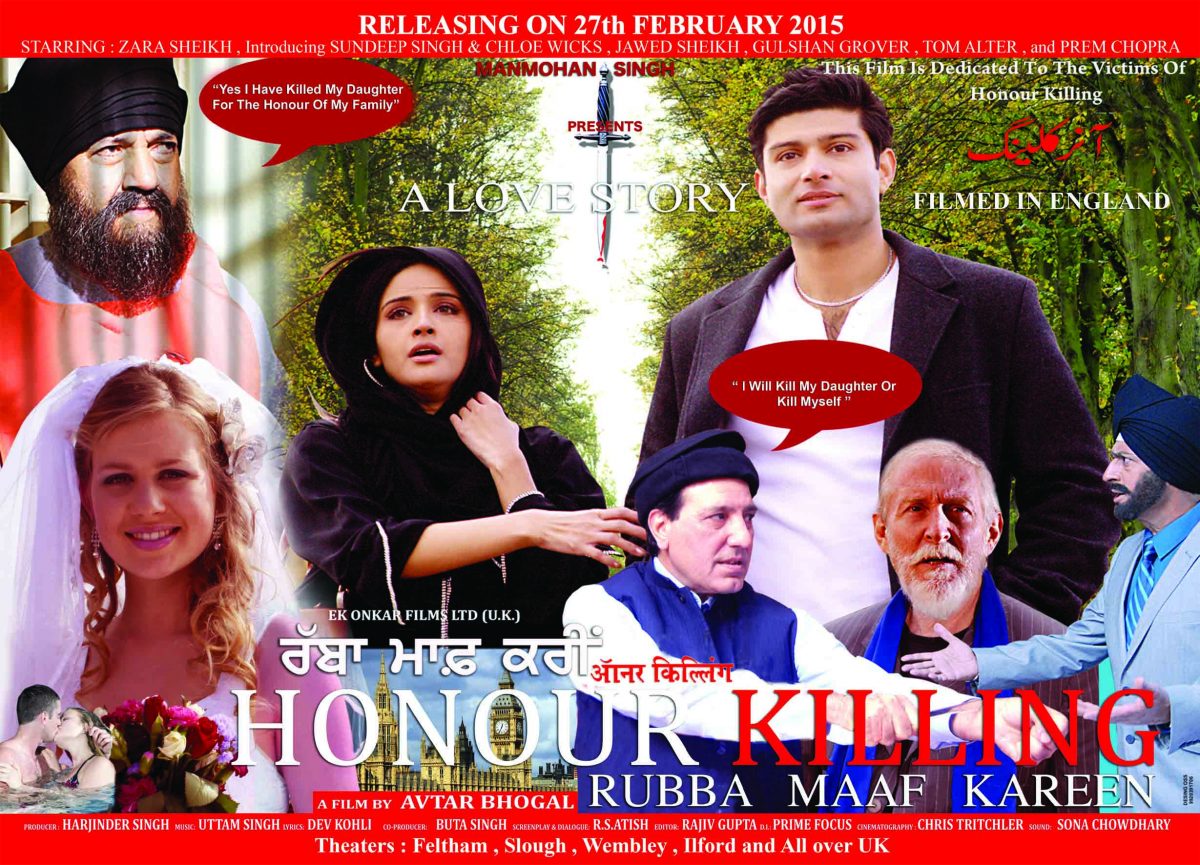 Delving unflinchingly into subject matter that previous filmmakers and narrators have avoided for fear of reprisal, a hard-hitting new film, ‘Honour Killing’, will get its long-awaited UK premiere on 27th February 2015 at Cineworld Cinema in Feltham. Several VIPs and dignitaries from the UK will be attending the event, including Chief Guest Dr Rami Ranger MBE, an international entrepreneur and community champion. He will be joined by several UK stars from the film, including Chloe Wicks, Sandeep Garchap, Nad Nazir, Sundeep Singh and Manjeet Johal. The film will be screened in 11 cinemas across the UK, and will also get its Pakistan screening in cinemas on the 27th of February through GEO TV.

The gripping and thought-provoking film sheds light on the barbaric practice of murder in the name of protecting family honour, which has seen an alarming rise in cases across the UK and parts of the Western world over recent years. Police estimate up to 12 people are murdered each year in the UK in the name of honour, with a further 500 forced into marriage or attacked[1]. The actual number of cases is likely to be much higher, but the shroud of secrecy surrounding them means that cases never come to light.

Presented by HiFi Entertainment Ltd, ‘Honour Killing’ is a multicultural film primarily set in London, although the narrative also takes the story to parts of India and Pakistan. ‘Honour Killing’ is directed by maverick Indian filmmaker Avtar Bhogal, famed for a series of controversial women’s issue films exploring themes of sexual exploitation and violence in the 1990’s, manipulating traditional Bollywood conventions to the consternation of the Censor Board, critics and traditionalists alike, at the time. In ‘Honour Killing’ he brings together on screen an accomplished pool of British, Indian and Pakistani acting talent, including Bollywood film industry veteran Prem Chopra,  Bollywood and mainstream crossover artist

Renowned international Indian film actor Gulshan Grover and Pakistani acting legend Jawed Sheikh, all of whom were keen to demonstrate their unreserved support in highlighting the global issue of ‘honour’ killings to audiences around the world.

Honour crimes are acts of violence, usually murder, committed by family members against female family members, who are perceived to have brought dishonour upon the family. A woman can be targeted by individuals within her family for a variety of reasons, including: refusing to enter into an arranged marriage; being the victim of a sexual assault; seeking a divorce, even from a violent or abusive husband; or allegedly committing adultery. The mere perception that a woman has behaved in a way that ‘dishonours’ her family is sufficient to trigger an attack on her life