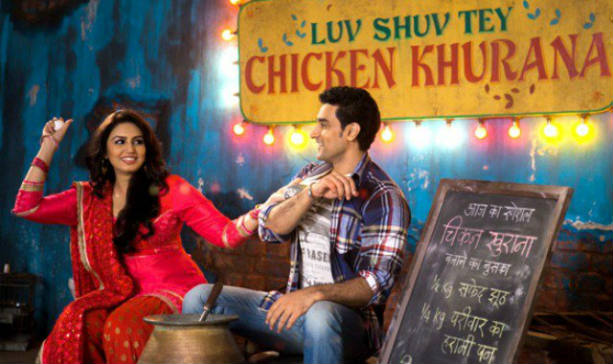 After wowing audiences in his role in Don 2 last year, Bollywood star Kunal Kapoor is back on the big screen with the crazily titled romantic comedy ‘Luv Shuv Tey Chicken Khurana’. Kunal spoke to Desi-Box about his forthcoming film in which he plays the lead role. Check out what the Rang De Basanti star had to say about the quirky new Anurag Kashyap production.

This is a very offbeat film compared to your usual commercial roles. How did you come on board for Luv Shuv Tey Chicken Khurana?

I have been involved form the start because the director Sameer Sharma and I have been friends for a while. One of the discussions was the concept of Luv Shuv Tey Chicken Khurana. So I have been part of the film since its inception.

Can you tell us about your role?

I play Omi Khurana. Omi is like a lot of Panjabi kids in Punjab, that want to go abroad for a better life to places like the UK, Australia Canada and USA. Omi runs away to the UK. However he finds himself in a bit of bother and has to go back. It’s unlike anything I have ever played before. Heart of it, is that he is a good guy who has sort of lost his way.

Yes we shot the entire film on location. We shot in the outskirts of Ludhiana in a small town. We wanted to keep it as real and accurate as possible. We were completely sure we did not want to shoot in a studio or a set. Overall we shot for a couple months in Ludhiana and then shot for a week in London.

How does working on Luv Shuv Tey Chicken Khurana compare to your previous roles in commercial Bollywood?

This is the most fun I’ve ever had shooting. Maybe, it’s because I’ve been involved since inception. Besides, we were also a really young bunch of people coming together. We wanted to do something new and tell a story in a way that not done before. For me this is almost like Yash Raj Films and Anurag Kashyap crashed into each other other and made a film. As it is a heart-warming film with the madness and quirkiness of an independent film.

Anurag Kashyap is the best producer you can ever have. As a producer he gives the Director the complete creative freedom to make exactly how they want to make it. I think that it is really important to have that for a director. At same time Anurag is there for u. If there is any sort of trouble he will be standing behind you. To have a producer who give you such creative freedom and that stands behind you is the absolutely best combination you can have ever get.

What was it like having a close friend direct you?

I think it’s great to work with a friend. As you already understand each other and have a bond. That always makes a big difference when working on a film.

How good of a cook are you?

(Laughs) I’m an atrociously bad cook! I don’t think I am the right guy to cook. I’m similar in that way to my character in the film.

How much Improvisation is in Luv Shuv Tey Chicken Khurana?

There was always scope for improvisation. That helped in order to make the film as real as possible. We experimented with various lines in a lot of different ways which is always exciting.

It’s a heart-warming story about family and food. There has never really been a film that has revolved entirely around food. Every time see Panjabi characters and films it’ always quite exaggerated. We drew as much as we could from real life; in order to make it real as possible and create something that audiences have probably won’t have seen before. I hope everyone will go out to the movies and watch Luv Shuv Tey Chicken Khurana. I’m sure they won’t be disappointed!