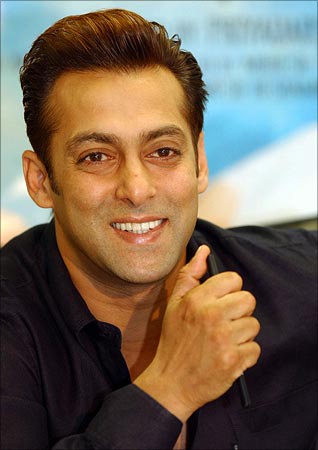 Bollywood bad boy Salman Khan reacted calmly after getting a tight slap from a 20 yr old exuberant girl named Monika in a party. Rather bursting over the girl for misbehaving, he instructed the security guards to escort the lady out of the party.

Present on the occasion were Bollywood actors like Sushmita Sen, Sohail Khan, Riya Sen, Amaan and Ayaan Ali Khan. The party was thrown in the capital to celebrate the success of Sanjana Jon’s fashion show.

Talking about the incidence a source said, "The party went on till the wee hours of morning. A sloshed Monika accompanied by a male friend first tried to forcefully enter the party venue. She was too loud and completely out of control because of her intoxicated state. Sohail Khan, who was standing close to the entrance, saw the hungama and asked the security guards not to let Monika in.”

“Meanwhile, Salman heard the commotion and walked to where Monika was making a fuss. She was misbehaving and started bragging about her connections and abused Sushmita Sen. When Salman very politely asked the girl to leave, she suddenly slapped the actor,” adds the source.

Suddenly a crowd gathered and the girl was shown the exit door, “Surprisingly, Salman did not retaliate even once. He kept his cool and went inside with Sohail after the girl was taken away,” says the source.