Bhangra blasts its way into the top ten! 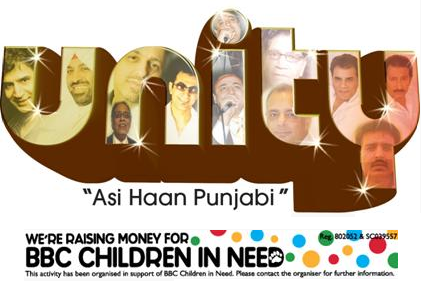 Bhangra blasts its way into the top ten!

Prepare for the ultimate blast from the past live on TV tonight!

The official bhangra tune for BBC Children in Need has rocketed into the top ten on the iTunes World Chart in only a few hours, increasing hopes that it will be the first bhangra song to hit the top spot.

The feel-good track titled "Asi Haan Punjabi" (We are Punjabi) released on iTunes today and has proven to be a hit with bhangra fans around the world.

The song is expected to climb up the charts as the stars perform it live on one stage during the BBC Asian Network’s Children in Need Main Event in Birmingham tonight. The exclusive bhangra extravaganza will broadcast at various times during BBC One’s coverage of the annual Children In Need show, presented by Sir Terry Wogan.

The concept of the Unity project was masterminded by the former member of Premi, Rajuu, who was inspired to ignite the light in the some of the biggest bhangra stars of the 70s and 80S. It marks the first time that so many legendary artists from the golden era of bhangra have come together to feature on one track and perform live on BBC.

You can support Children In Need by buying the track from iTunes for only 79p.