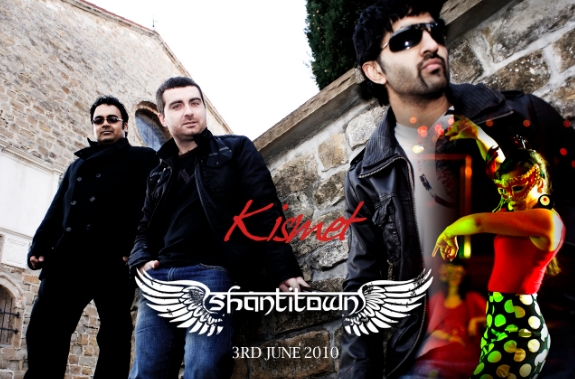 Just when you thought that bands were a thing of the past in british south-asian music, along comes SHANTiTOWN. Kismet, releasing on the 3rd June 2010 is the debut single from their forthcoming album.

A cardboard shelter under a busy flyover in London, home, no doubt to an unfortunate and anonymous human being, was the inspiration for the name of the band. SHANTiTOWN are about fusion and experimentation. They combine the musical drive and energy of western rock and suffuse it with the melodic vibe and lyrical poignancy of Indian music.

To SHANTiTOWN music is a mystical language that transcends our petty rivalries and shrill noise. If it were not so how could Amar Singh a Hindi/Punjabi vocalist, Ennio Capria an Italian guitarist and Raj Thakral a Rock drummer have ever come together to create the musical force that is SHANTiTOWN.

Their songs are a fusion of sounds and cultures and mirror Amar Singh’s own journey: a soul of the east in the body of the west. They range from ‘Kismet’ a Latin guitar tinged tribute to the healing power of romantic love to ‘Saareh Jahaan’ a sufi inspired mystical hymn to ‘Kamaal’ ,a heartfelt call to rise above our religious differences and recognise our common humanity.

For the live shows SHANTiTOWN are collaborating and playing live with cutting edge DJ and Producer ‘Bad Boy Jackal’ to deliver a unique live experience to their fans. SHANTiTOWN are in rehearsals with Jackal for a series of gigs to promote the single and forthcoming album.

The video Kismet by the group will be broadcasted as WORLD PREMIERE on Desi-Box.com on Friday 21st May 2010 at 9PM.

WATCH: The Behind The Scenes of The new video ‘Kismet’

Shantitown’s debut single Kismet is out now on iTunes