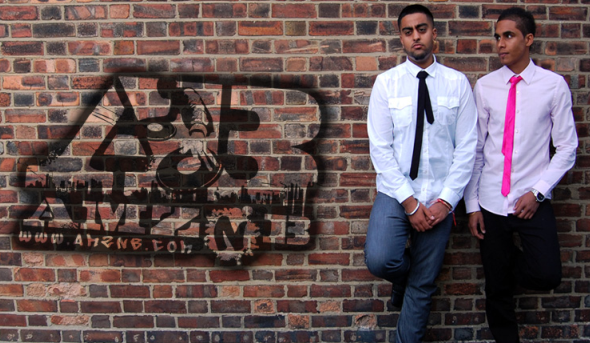 Born and raised in an area of London not known for its Asian producers, amz ‘n’ b are two man production team set to make their mark on the Asian music scene. Descending from south east London the talented eclectic young duo brings together a diverse range of influences and a distinct passion for music which is second to none. In an era when differentiating yourself from others is becoming harder than ever, Amz ‘n’ B are in the unique category of artists who have spent years learning their musical trade, both classically and in studio. They plan to gradually introduce themselves to the Bhangra scene with a number of singles released throughout the year, each single demonstrates creativity and quality the duo possess.

Amz embraced the rich history of music with his classical training in tabla and harmonium at the sikh temple from a young age. These established educations gradually lead Amz onto becoming an accomplished percussionist in both the classical art of tabla and dhol. Now being fully equipped with the knowledge of music and culture Amz focuses on the beat elements of the production, with these skills he souly ensures to create a sound which is fresh and funky.

Finally, the production duo is made complete with the enigmatic producer; b. The entrepreneur producer saw his natural flair for music from a young age of djing, then further took it in his hand to experiment with his gifted talent. Along with Amz’s fresh and funky beats, and B’s extensive knowledge in the Desi sound and Bhangra industry, b states: “by using my knowledge and skills that i have learnt on my way through the music industry, we have collaborated with some big names and wish to show our originality and versatility on each track. This is only the beginning!” It is safe to say the two together will be exploding in the Desi scene with a big bang!

Amz n b are hitting the scene with their debut remix single titled “amz n b da dhabba”! The single is a remix of a classic mohammad sadiq & ranjit kaur song from the album “da akhda”.

“we decided to come out with a remix single first as we want to show our mixing skills and create a new sound fusion between classic bhangra & electro house, the perfect combination bringing the east to the west.”