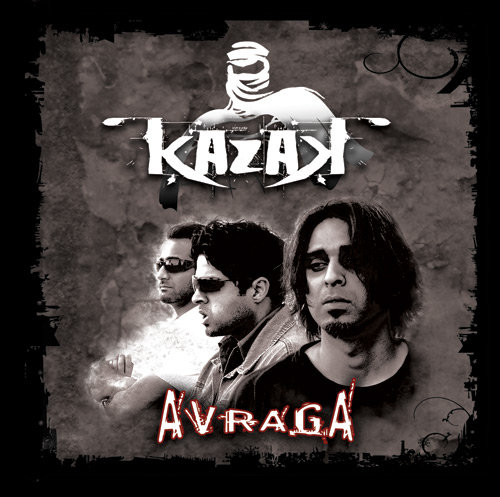 Kazak’s debut album was named AVRAGA with dreams of  solidarity, zeal and conviction. This is what the music on Avraga delivers when listened to. The musical landESCAPE in Avraga is unlike any other rock album out in the sub-continent, says Fayed, the brains behind this musical invasion. Kazak has taken all kinds of emotions that people go through in life and created an album with an environment which invites the listeners to further explore these emotions and make a life long connection to these songs. Keeping the lyrics simple and providing listeners with a musical platform which launches the songs into a domain where only provoking thoughts exist.  Songs like Believe and Yakeen which both mean the same thing, but thrusts listeners in two different directions. Yaad shows us how desi rock songs can gradually grow on the virgin desi rock audience. Hum and Waiting show the dramatic side of the band without compromising their rock roots and whenever seriousness makes an entrance into Avraga, it is extinguished with the funky sounds of the song Tu or the glamour of Keh Dey Nah.

THE BAND
Kazak was born from originality and their hunger to achieve. They have played together in studios and performed live gigs for years to find the unique sound in their debut album – Avraga.  Kazak has a certain edge to them, something that comes with the territory.  It has always been there and it always will be there. It is this edge that makes the band so  dynamic and keeps audiences engaged.  Maturing over the years, they have become one solid army of music. Always in sync, pumping out the noise, the music and the energy.  Kazak is now ready to make an impact globally with a two album record deal from Fire Records who have multi-platinum Asian artists on their roster including:  Atif Aslam, Adnan Sami, Jal and Strings to name a few. Check them out at: www.firerecords.com.pk Kazak has been fortunate enough to have played with the likes of: Strings, Awaz, Euphoria, Josh and Indus Creed and their debut album has been produced by Aaamir Hasan who provided the platform for the revolution in the sub-continent rock scene with Junoon’s breakthrough album “Inquilab” and has also worked with artists like Nazia and Zoheb Hasan. Kazak has performed at venues where rock legends like the Rolling Stones, U2 and Nickelback have amazed their audiences. Driven to establish themselves, Kazak is a band prepared to break barriers!

FEZZ  –  VOX
The voice of Kazak emerged from the sub-continent rock scene.… A character finessed by the emotion and feel that when combined together unleash a spectacularly fluid sound and visual that screams with originality, thrilling virgin audiences throughout Canada… Known to fans as "FEZZ",  this electrifying singer has broken many boundaries to be the voice of Kazak.

FAYED  –  GUITARS & BACKING VOX
A warrior who’s musical style provides the soul to Kazak puts it down in simple terms; "Great music is never made… it is created!". Fayed’s dream of changing the rock music landscape  in the sub-continent has given him the solidity to fight for a cause that needs to be heard.

ALDO  –  DRUMS
Creating the ‘rock’ on the ‘roll’… Providing the strength and force… Aldo gives Kazak the license to thrill! Equipped with two sticks and a saddle, this warrior creates Kazak’s beats that conquer the landscape with thundering aggressive sounds.

ANEET GUPTA  –  MANAGER
Promoted Kazak at any early age, cultivated and developed with the band through to a different stage. This ‘rocker in suit’ holds this fortress together.