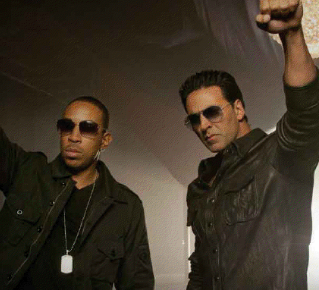 Set to release September 30 this year, Breakaway is a movie which truly explores the influence Indian culture has had on cinematic art in recent times; directed by Robert Lieberman (Titanic [1996]), and co-produced by Bollywood actor Akshay Kumar (the Khiladi series [1992 – 2000]), Breakaway looks to be a surge of Bollywood flair, spilling into contemporary Hollywood.

With characters and appearances to played by the likes of Canadian comedian Russel Peters, Hollwood actress and actor Camilla Belle and Rob Lowe, Bollywood legends Anupam Kher and Akshay Kumar, and even music sensations Drake and Ludacris, is was to be anticipated that the soundtrack of Breakaway was to be a fusion of East and West. This comes in the form of Shera Di Kaum, a track delivered courtesy of Punjabi producers RDB, who worked alongside rapper phenomenon Ludacris!

RDB, already having worked alongside rap royalty for a Bollywood soundtrack, title track Singh Is King (which also starred Akshay Kumar), back in 2008 with Snoop Dogg, have now teamed up with rapping sensation Ludacris for Breakaway’s lead track Shera Di Kaum.

Check out what RDB have to say about the track and movie, as well as a sneak peak of the single itself!