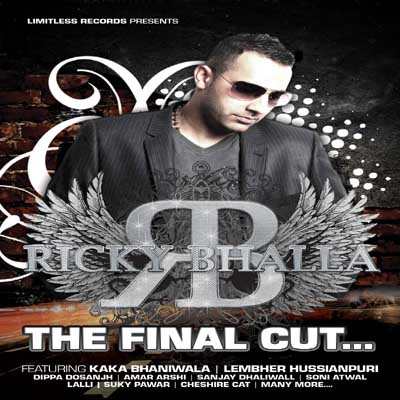 Ricky Bhalla prepares to release one of the most anticipated debut albums in years, titled ‘The Final Cut’

Birmingham born Ricky Bhalla is one of the hottest deejays on the Asian music circuit. Having perfected his talent for many years, it was only natural for him to progress onto producing an album.

Under the guidance of Limitless Records, Ricky originally featured a track on the smash hit album ‘Jaan Panjabi’. Since then he has been busy in studios both in the UK and India recording with some of the biggest singers in bhangra namely Late Kaka Bhaniawala, Lembher Hussainpuri, Dippa Dosanjh and Amar Arshi.

Three high budget videos have been shot for the album in the UK and India. All videos will be airing across all TV stations shortly.

So get ready for… ‘The Final Cut’