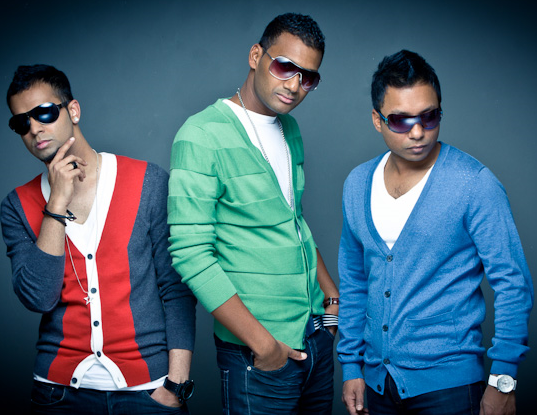 Desi-Box caught up with Canadian South Asian urban/pop and electronic musical group The Bilz and Kashif to find out what the group has been upto since their released their second album Breaking Barriers earlier on this year. Without further ado Ladies and Gentlemen we bring you The Bilz and Kashif!

DB: Hey guys! How you all doing?

DB: So 2 albums down so far, and still going strong. How have things been since the release of ‘Breaking Barriers’ in May, earlier this year?

Bilz and Kashif: It’s been ridiculously busy but we wouldn’t have it any other way. This is what we love doing and you can definitely see it with our album – Breaking Barriers. It was a long wait, but the fans supported the album making its debut at the #6 most downloaded album on iTunes World charts! They fuel our passion to keep moving forward and help achieve success in our amazing journey!

DB: From where we’re standing, it’s had a great response, just like your first album. You’ve been touring all over the world, and are now recognised as International artists. What response have you had from fans and how do you feel about the album?

Bilz and Kashif: It’s great being recognized around the world. We’ve always focused on brining nothing but the best to the table especially when you’re aiming to be recognized as an international group. This last year has been crazy for us.  The first album was a stepping-stone, and that just helped shift us into 6th gear. It’s been amazing. There are so many wonderful moments we’ve had. We shot 4 monster videos, placed “Kuri Punjabi” in a Hollywood movie even before the album dropped, and toured all over the States. The response has been overwhelming and we’re super happy that our fans understand how much sweat we’ve put into ‘Breaking Barriers’. We’re very proud of the work and the music we’ve created. We really feel that Breaking Barriers is one of those all-time hall of fame classic albums for the urban desi scene. When choosing the tracks, we pictured every track on the album could have a music video! No joke (laughs)!

We really feel that Breaking Barriers is one of those all-time hall of fame classic albums for the urban desi scene.

DB: How do you think your music and this whole album Breaks Barriers’?

Bilz and Kashif: We believe that we’ve always been breaking barriers from the very beginning. Our ultimate goal has always been to make quality crossover/fusion music. Music shouldn’t have any boundaries and that’s exactly what happened with 2Step Bhangra. The record was being played on mainstream radio alongside Beyonce, Justin Timberlake, Sean Paul and Rihanna – that was a huge deal for us. We shook the industry, showing them that you don’t need major collaborations to really make singles a hit, and being South Asian, was an even bigger deal. It’s great though, because now the Canadian industry knows who The Bilz & Kashif are, performed at Canadian Music Week, and even Socan mentioned us and recognized the growth of this new industry. So at the end of the day, we’re happy that we’re setting the trend and allowing North American Desi artists to have a chance to be heard.

DB: The first album was credited to just ‘The Bilz, however ‘Breaking Barriers’ is credited to ‘The Bilz & Kashif’. Do you think this has had/will have a significant effect? What does this mean to you as a group, and to you personally Kashif?

Kashif: When we were touring for the first Bilz Album, it was just The Bilz and I. Our chemistry was awesome and we had a blast travelling and sharing the stage together. There wasn’t a time when Master-D and Vicious were in the studio, and I wasn’t there to give my input. So that musical experience was so much fun that we decided to become a group. I love our friendship and what we represent as a unit. Everyone one of us brings something new to the table every day, the mind set to the vision is always on the same page. So it makes me feel even more confident from the business perspective along with the hits that we produce together. I feel like we’re one of the pioneers in the urban desi game, the first Asian supergroup with a Hypeman/DJ, a Hindi/Punjabi singer/producer/entertainer and an R&B/Pop singer/dancer/songwriter in the same band.

DB: Now, this is for Kashif. You’ve recently collaborated with ‘Beautiful Musique’ on the track ‘Changing Lanes’. Can you possibly tell us how this came about, and why you decided to do it?

Kashif: It was a beautiful sunny day in LA! (Laughs). Well it actually was, and we touched down in LAX to shoot our next video, “Single”. As we checked into the JW, Vicious told me that our video producer, PeeZee, was working with this group out in LA called Beautiful Musique. They had checked out our videos and all the success we’ve been gaining internationally with our music that they were interested in a possible collabo. So when we met up with PeeZee on location, at Laguna Beach, he handed Vicious an instrumental track of Beautiful Musique’s next single.  I mean they were working with a lot of people in LA and a few projects with Paul Wall & Interscope Records. And I know they are also on the new episode on that reality TV show, called Bad Girls Club Season 6.  So it sounded interesting. So we popped in the CD and we were jamming in the parking lot, waiting for our video set to be ready. In a couple of hours I came up with a massive hook to their rough single. That’s when we knew it was a hit. Vicious called up PeeZee, to take a quick listen, he loved it, he made a call to Beautiful Musique and next thing you know, after returning to Montreal from our Videoshoot in LA for Single, I recorded my part, they flew down to Montreal and we shot my parts of the video. The result a smash collabo called “Changin’ Lanes”. Get it now on iTunes!

We shook the industry, showing them that you don’t need major collaborations to really make singles a hit, and being South Asian, was an even bigger deal.

DB: This leads us onto our next question. It might seem a bit controversial, but is there a possibility that you may be looking to concentrate on a solo career Kashif?

Kashif: (Laughs) How did you hear that? I definitely didn’t tweet that 😉 I got to tighten up the security LOL. I guess Desi-Box is always on top of things huh? Well, I wouldn’t consider it controversial at all. We support each other’s individual projects 100% and Vicious is always looking 3 steps ahead. It’s eventual growth for an artist and I think timing is important. So I’ve been locked up in the studio working with Master-D and a few other super producers that I can’t mention right now but I’m very excited. I promise my solo album will be totally worth the wait.  If fans have album title ideas, tweet them to me @Kashifonline 😉


DB: Back onto the 3 of you that make up the amazing group that you are. A few artists from our industry have moved on to Bollywood, and are doing tracks over there. Have you had any offers from Bollywood and is this something that you’d like to do, or would consider doing?

Bilz and Kashif: Of course, but Bollywood is a whole different beast. We’re definitely open to working with that side of the world, especially with Master-D’s talent, but we’re so proud that we’re representing North America on a global level. So we’ve been busy lending music to Hollywood and independent North American releases that have done great at film festivals. For 2011, it’s definitely on our road map and we’re hoping that we can knock out a few Bollywood movie scores too.

DB:  What can we expect in terms of future collaborations from you guys? Is there anyone in particular that you would like to work with?

Bilz and Kashif: 2011 is looking very promising. We’ve secured “Heer Ranjha” on a Punjabi movie that is set to release in the 3rd quarter. We have also secured a track with a popular Bhangra artist in the U.K that we won’t mention yet, but its one hell of a massive track. There are a few more in the pipeline that need to be finalized, so yes, 2011 looks like a very collaborative year. We might also be signing a new artist and expanding Bilz Music to different heights.

We’re just in the planning phase hopefully having 2 more videos for the Breaking Barriers album making it a total of 8 videos,

DB: What are you up to as of recent? Are you working on more videos, releases, tours? Will you be doing anything in the UK anytime soon?

Bilz and Kashif: We’re always on the grind, locked in the studio, radio & media interviews, it never stops and it shouldn’t! Right now we just released a set of limited edition T-Shirts in collaboration with Desiwear.com. The recent once is the “Astro-Music” T-Shirt and we have another design on its way. These are extremely limited, so once they sell out, you will not find it anywhere. So make sure you get it while it lasts. You also get a FREE CD and some FREEBIES courtesy of DesiWear.com. As for music, we have a bunch of brand new spanking material coming out soon for 2011 as we said. For videos, yes, we’re just in the planning phase hopefully having 2 more videos for the Breaking Barriers album making it a total of 8 videos, WOW! Yes, we’re also going to be touring all over North America and the rest of the world and hopefully we can come down to the UK. I think our fans have waited long enough. We seriously cannot wait to perform for our UK fans so make sure you keep checking our Facebook Page and website (bilzmusic.com) for more tour dates and exclusives.

DB: Finally guys, do you have a message you’d like to send out to your Desi-Box fans?

Bilz and Kashif: First, we’d like to thank Desi-Box.com for always supporting us since day one and helping us spread our success to the U.K fans that keep supporting our music. We totally love our fans! You’ll hear us saying that at every show we do. We really want to thank them for all of their unconditional love and support. We owe all of our success to them. If you love the album, singles or the videos, make sure you download the songs legally on iTunes so we can continue this legacy of quality music for the world to see that us “DESIS” are the next generation. Don’t forget, you can hit us up on our Youtube, Facebook, Twitter and Bebo to connect with us and for all of our news and updates. 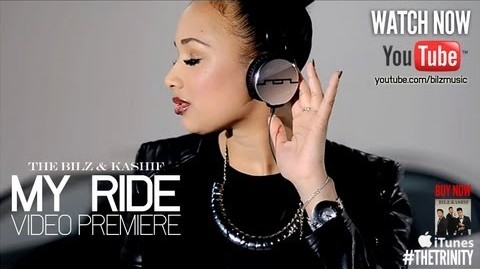 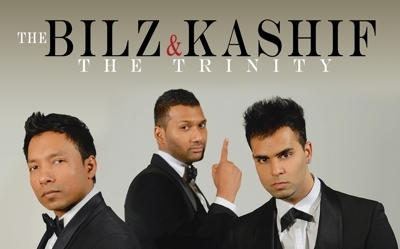 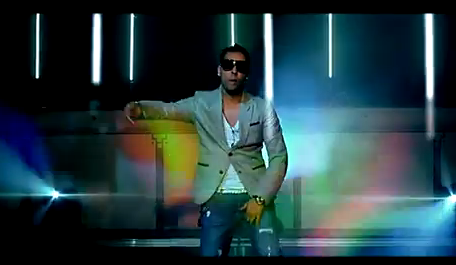