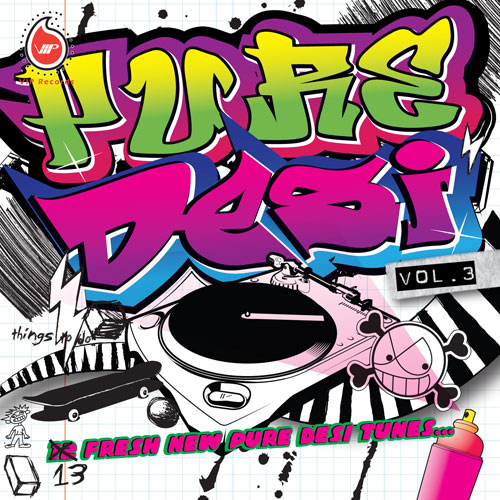 VIP Records are proud to present the third instalment in the chart topping Pure Desi series. February will see the highly anticipated release of Pure Desi Volume 3,  with the series previously delivering diverse hits such as Tarrak Tarhi, Teri Tor Vek Ke and Bhabiye Akh Largayi to name a few.

Pure Desi Volume 3 sees a global line up of vocalists, musicians and producers, combining to deliver a contrasting 12 track compilation album featuring some of the most talented names in the industry.

After the huge success of remix album In Tha House, Kaos Productions deliver another Punjabi classic re-worked in their own vibrant style, this time ‘Long Dha Lishkara’ sung by Minoo Purshottam is given the Kaos treatment.

A universal production line up is completed by acclaimed percussionist Ryan Singh (Dholicious), Australia’s finest; Jaskurn Gosal (Nachne Da Mazza) alongside producer Bhinda Aujla, who has produced for some of the biggest names in the industry, appearing courtesy of Moviebox. Newcomer DJ Shahbaz completes the talented line up of producers on this eagerly awaited release, who will be releasing his Bollywood album on VIP Records later this year.

Keep a look out for the singles ‘Mitran Ne Dittiyan’ & ‘Bhangre Wich Mashoor’ which will be playing on all radio stations shortly.

Visit http://www.viprecords.co.uk to listen to samples, watch the video and order your copy now!