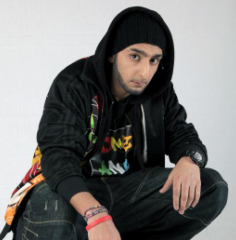 DB: Hi 21 Perspective, for those who haven’t heard of you before please let them know who you are.

21 Perspective:I’m a 22 year old medical student and was fortunate to graduate in Philosophy last year. I’ve been doing music and poetry for about 6 months; acting maybe 2 years or so.

DB: You started of as a manager and now you’re an artist. How has life changed, which is harder?

21 Perspective: Artist definitely. You have to be in control of everything from lyrical content and vocal composition to marketing and image. It requires serious time, effort and dedication

DB: As a new artist; what do you think that you bring different to the market? How would you describe your sound?

21 Perspective:I always just say I’m myself on the mic. I talk about my studies, my personal struggles, girls, politics, everything – just whatever’s on my mind. A lot of people have said I’m a “conscious artist” but in reality I just spit about truth of what I see regardless. Anything and everything – let’s say I’m a social commentator (chuckles)

DB: You have a new single out called ‘I Will Be Waiting’, please tell us more about it. Is it a personal experience?

21 Perspective:Yeah very much so. It’s about THE girl. The one meant for me but she was already in a relationship. It broke my heart. Crazy thing is she doesn’t even know how I feel or that this song is about her. I received a lot of criticism for bringing religion into that song but I uttered every single line in that song with pure sincerity. Wouldn’t change it at all…

DB: Do you feel that there are unneeded stereotypes placed on Asians in the U.K.? Because of that, do you feel there are stigmas fixed to being an Asian musician?

21 Perspective:Yes. I am in complete concurrence with you but it’s funny because I just see myself as a musician who HAPPENS to be Asian and thus some of my issues are related to that. It’s a small fragment but it’s not THE defining piece of who I am. I think a lot of artists don’t realise this and get tied down to this stereotype and just play it out. It’s so repetitive – I don’t think many artists actually think about their content before they put pen to pad.

DB: If you had the chance to collaborate with any mainstream artist and producer who would you want to work with?

21 Perspective:Top urban UK artists I’d love to work with are Dot Rotten, Dappy, Kano and Mic Righteous. Top Asian artists – Sam Khan, Shizzio, Roach Killa and probably Tigerstyle producer wise. I was fortunate to work such an incredible veteran recent – Uncle Mix. Absolute phenomenon! So so many others; you have to remember I only started doing music a few months ago so I’m a massive fan of everybody.

DB: What advice do you have for other upcoming artists?

21 Perspective:Two things: 1) Be professional and present yourself well. When it comes to marketing, internet promotion and such, you cannot afford to be weak
2) Have an image. A clear gimmick if you are genuine about getting somewhere. Find something innovative about yourself and push it. I’ve tried to do that with my Romantic and aggressive Suicide Kid personas – they allow me creative freedom to do whatever but I can retain a clear image with each of them from how I deliver in the booth to dress sense.

DB: What has been your most memorable musical highlight so far?

21 Perspective: Been a few. Performing at Ministry of Sound – that’s like one of the most globally renowned places in the world. Getting my distribution deal. I’d have to say though getting recognised as a BBC Introducing Artist earlier this year by Bobby Friction.

DB: Where do you see yourself musically in 1 year?

21 Perspective: Got an unofficial mixtape out soon called #TeenageDrama. My #StraightAStudent EP is mixed and mastered now with 1/2 singles. Got 4 other separate singles set. I’m starting two online series called #TheTruth Diaries and #TheSuicideSessions (for the Suicide Kid). Plus hopefully dropping my film this year too. God willing.

DB: It’s been a pleasure speaking to you, do you have any last words for your fans and Desi-Box readers?

21 Perspective:Check my debut single I Will Be Waiting (instrumental by Zaheer):