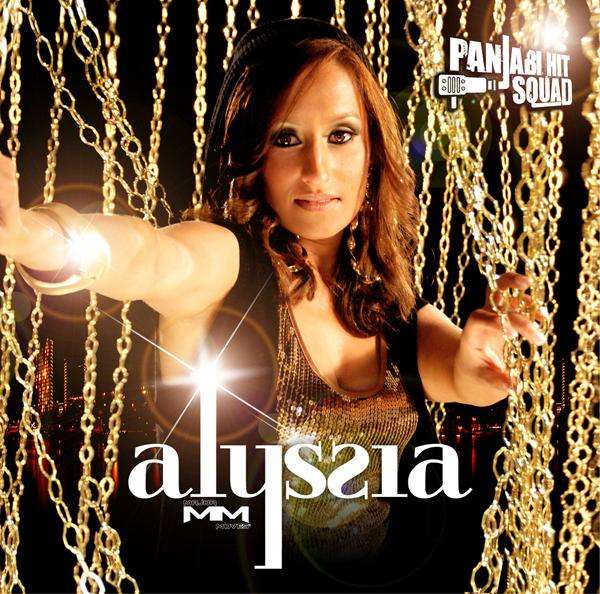 Her trademark of blending Indian harmonies in a smooth RnB style is set to make her one of the most striking figures on the urban music scene. Alyssia is a natural born performer, she has been singing from the young age of 5 and at 14. She is now the newest signing to Panjabi Hit Squad’s Major Move Records.

This album will be the definitive album to come out of the Asian music scene in many years. Alyssia is a distinctive talent and with the backing of Panjabi Hit Squad, one of the best producers in the business, she is ready to breakthrough on her self entitled Debut album which will combine her impressive vocals to the urban sounds of Hip-Hop, Reggaeton, R’n’B and more.

Desi-Box.com caught up with the beautiful Alyssia, Haroon had the privilage to do the interview with the wonderful vocalist this is what went down.

01. Haroon DB: Hey for all the people who have not heard of you (gosh guys where you been) could you please introduce yourself?

02. Haroon DB:I would like to say congratulations Alyssia on your debut album how do you feel?

Alyssia: Thank you. It feels great. It’s been a long time working hard on the album, doing gigs and promotions. Now the album is finally out and bringing a new sound to the Asian music scene 03. Haroon DB:How did you link up with the famous Panjabi Hit Squad?

Alyssia: Well I linked up with them around 2004/2005. They had been working on the Ms. Scandalous album at a studio I knew about. They heard that I could sing so I just sang in front of them there and then. All I see is both Dee & Rav Face light up. The next thing you know im in the studio with Ms. Scandalous putting down ‘Spread love’. The rest as they say is a rap!!

04. Haroon DB:Do you think you had easier debut to normal newcomers as you are backed up with the award winning Panjabi Hit Squad one of the best producers in the business?

Alyssia: I don’t think it was easier as we worked extremely hard on the whole album. I think if you have good songs and a good professional package people are always willing to open there doors to you. There are some singers out there that have good songs but no marketing scheme, a video that is shameful to even air on TV plus a bad attitude. That’s what lets them down. With me it has been nearly 2 1/2 years of solid hard work. I recorded nearly 25 songs. Some make the final cut some don’t. I had a good team around me which is why I feel my project will be successful. 05. Haroon DB:You first appeared on the album “Ladies First” with the tracks “Gal Sun” and “Spread Love” both tracks made such big impact how did that feel?

Alyssia: Those songs were the start in something so special to me. I had found a new sound and a team that actually believed in me and my voice. When you hear both those tracks and the reaction you get it actually puts goose bumps on me. To hear people singing “Hum Tum Ek Kamre Main Band Ho” actually means that people are hearing what your saying. Me + Scandalous got many messages from girls saying thank you for writing that song as it was a real issue, it isn’t sugar coated like what bollywood can become sometimes.


06. Haroon DB:How did the track “Deewana” come about? Do you write your own lyrics?

Alyssia: Rav and Dee made the beat and the track. We actually started with a different song and beat but then Rav decided it wasn’t ‘The One’. So he went back into the studio and a couple of hours later came with this beat. From that Rav + Dee all linked with a songwriter and together they came up with the whole composition, lyrics and melody of the song. I then came to the studio changed certain bits and from that it was radio ready (As Dee Calls it!)!! I do write some of my own lyrics but most of the time I leave them in the hands of Rav & Dee. 07. Haroon DB:  “Deewana” from your debut album exceeded all expectation and was at the Number 1 for numerous weeks on various radio stations including Sunrise Radio, Club Asia, BBC Radio1, BBC 1Xtra, BBC Asian Network, Sabras Radio, Asian Sound, how did that feel?

Alyssia: To be acknowledged by people and radio is a great feeling but to be number one is amazing. I would like to say thanks to all the radio stations and Dj’s who supported my on “Deewana”

08. Haroon DB:You performed alongside Ms Scandalous and Panjabi Hit Squad over the summer and melas including London Mela, and Newham under the Stars, How does it feel playing to different crowds and also which crowd would you say was the best so far?

Alyssia: Every crowd is different. I think they have so much love for Panjabi Hit Squad & Ms.Scandalous that sometimes it hard to judge which one is better. For me one of the most challenging performances has been in Amsterdam. I had played just after Razorlight who then came up to me after and said “That was Incredible!!”. There were no Asians in sight but all you saw was a massive amount of respect and amazement out of so many people. Its just goes to show that music is a universal language of its own 09. Haroon DB:In the Melas you sang the song “Raja Ki” from old classic movie, how come that track did not get featured on your debut?

Alyssia: We had done the track but we had major licensing issues with the track. It was a major reason why the album was so late in releasing. We tried extremely hard to clear it in time but it wasn’t to be. Don’t worry it will be released soon!!

10. Haroon DB:How did it feel like collaborating with the famous Grammy Winner “Fatman Scoop” and how did that come about

Alyssia: That was all Rav + Dee. Pyar Hogiya was such a hip-hop record that we just felt it needed a different vibe. So we remixed it! We had such an amazing response off the remix that Rav Remixed the Remix. The boys know Fatman Scoop and AV8 Records well so it was all done in a matter of days!

11. Haroon DB:If you had the chance who would you collaborate with and why?

Alyssia: I think Sonu Nigam and Himesh Reshammiya are my two favourite artists that I would like to collaborate with. They are just amazing!

12. Haroon DB:So what are your plans for the future and what can we expect form you?

Alyssia: Im working on Panjabi Hit Squad’s Album and Ms.Scandalous album plus I think the boys have a little surprise for everyone. Im not going to say much yet but it is something amazing. This person is going to tear the music scene apart! Alyssia: Im not sure. Im trying to get ‘Now’ done first J

14. Haroon DB:  Any advice for all the people who are struggling to make it to the music industry?

Alyssia: Just keep making the music. If you believe in what you do it will happen for you. Also contact Panjabi Hit Squad there always looking the next big thing

15. Haroon DB: Any last min message to your fans worldwide

Alyssia: Thank you for all your support, Kindness and appreciation. Please keep in touch with me at my website www.alyssiaonline.com or add me on facebook, Just type alyssia. I like to connect with all my fans! and thanks to Trix!