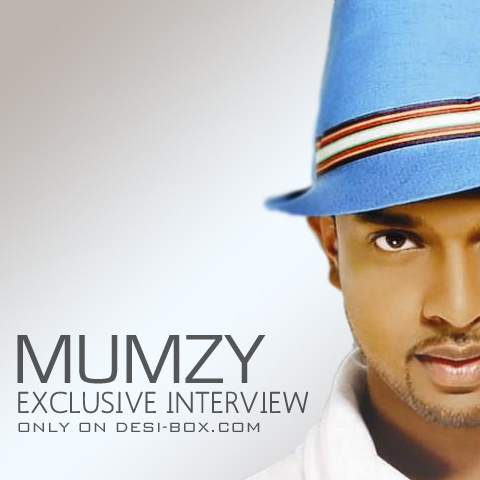 Mumzy Stranger is the latest pop sensation to hit the music circuit. With his debut single One More Dance, releasing on July 20th, he springs onto the scene with an exciting new sound and distinctive urban style.

The combination of his smooth, soulful vocal style, catchy pop rhythms and clean-cut, urban look has already got industry insiders touting Mumzy to be one of the year’s hottest new artistes. Topped with his trademark hat and armed with boyish good looks, the 25-year-old is the first person of Bengali descent to create such excitement.
Signed to Tiffin Beats Records, One More Dance is produced by Rishi Rich, who has also worked with the likes of Madonna, Britney Spears and Craig David.

Aisha from the Desi-Box.com Team caught up with the rising star Mumzy Stranger check what went down below: This interview is a EXCLUSIVE to Desi-Box.com!

01. Aisha DB: For those who don’t know who you are, give us a little intro.

Mumzy Stranger: Firstly the names Mumzy Stranger, I’m an RnB, soulful bashment artist from East London! I write and produce music and also dance. Been into music since the age of 11 and its been a long journey being a British Bangladeshi trying to break through into this music industry! And here I am now signed to Rish Rich and Tiffin Beat
Records…

02. Aisha DB: Congrats on your new single, ‘one more dance’, which is being released on 20th July, how do you feel having completed the single?

Mumzy Stranger: Thank you, words can’t explain how I really feel but I’m very happy and fortunate to have this oppertunity to get a single out, and me and my team have worked really hard to get to this chapter and I’m proud to be representing the UK, i just hope everyone supports me…

03. Aisha DB: Is it true back in 2005 a friend of yours sent a demo tape to BBC Asian network, and this is how your name was recognised?

Mumzy Stranger: Yes this is true, I didn’t have a clue but you know what they say about great friends.

04. Aisha DB: What is it like working for a top music producer, Rishi Rich?

Mumzy Stranger: His alright..lol… Nah for real working with Rishi has changed my career and I feel respected and lucky to have met him! A pure genious in studio which has taught me some crazy skills! The most humble and talented producer I have met and best of all he his honest and I didn’t think that he would be like that so its great to roll with Rishi Rich!!! 05. Aisha DB: Any date on your album? Or is it still too soon? What sounds can we expect from it?

Mumzy Stranger:Ok I’m hoping release to be in November but no date as yet. I have 4 producers on the album, Rishi Rich, Rax Timyr, Alan Sampson and Producer B. So a bit of RnB, Danchall, Pop, Rock, Hip Hop and Myself!!!

06. Aisha DB: Where did you learn to dance like that, did you get lessons?

Mumzy Stranger:Eeerm… I wouldn’t say lessons but a very close friend of mine Taz Ahmed has taught me for the past 6 years! I mean every dance move that I know! I’m telling you he is the best!

07. Aisha DB: We heard you were apart of an anti-violence campaign, how did you get involved in that?

Mumzy Stranger:Well as I have lived in Plaistow in Newham all my life I’ve been through that rough time and seen a lot and a lot of people support me in the area so violence campaign contacted my managment and asked if I would support this cause and I’m always up for helping so I went and did my thing.

08. Aisha DB: What do you want to achieve from your music?

Mumzy Stranger:I want to be respected and break the barrier for being the first Bangladeshi artist in the world to enter this music industry! I want to be up there with the best getting them hits and just enjoying what I do.. 09. Aisha DB: Where did you get your inspiration for the track ‘one more dance’?

Mumzy Stranger:Being a dancer from young has always inpired me to do a track that let’s people dance and go crazy! But it came from Veronica and Rishi who wrote the song with myself and they inspired me to go for it.

10. Aisha DB: In the music industry, who do you most admire as your role model?

Mumzy Stranger:I really look up to Michael Jackson as he has proven that you can do everything if you work hard! And great artists like Usher and Justin Timberlake have carried that on to inpire myself and others.

11. Aisha DB: How do you cope with the pressures of performing in front of a huge crowd?

Mumzy Stranger:I enjoy it a lot and to be honest I’m ok but it all depends on who is in the crowd and their reactions, I suppose you get bad and good days, you just got to be calm and move on.

12. Aisha DB: When you write a song do you write it especially for the Asian market?

Mumzy Stranger:Nah not at all, a song should be written for any one, as I sing in english I have that advantage to write for everyone, it all depends on production style. 13. Aisha DB: Your music and style have been compared with Sean Paul how does that make you feel?

Mumzy Stranger:Woooow! Sean Paul is unique and amazing! Its a big compliment for people to say that but at the same time I would like to be seen as myself as I can sing and rap but hey Sean Pauls style comels from Supercat for those who don’t know so big up to both of them, now its my turn.

14. Aisha DB: You have collaborated with Rajeshwari and worked with Bollywood music Director Anu Malik, if you had another chance who would you choose to collaborate with, and why?

Mumzy Stranger:Yes that is true and it was an honour, I would love to work with Kanye West, Keri Hilson, Sean paul, Joe Thomas and the list can go on!

15. Aisha DB: And finally, would u like to give a message to your Desi-Box fans?

Mumzy Stranger: Yes indeed! Just want to say thank you to all my fans who have got me this far but now I need your support! My single ONE MORE DANCE is out 20th July everywhere and is available on iTunes now to pre-order so go buy it and show some support! Mumzy Stranger.