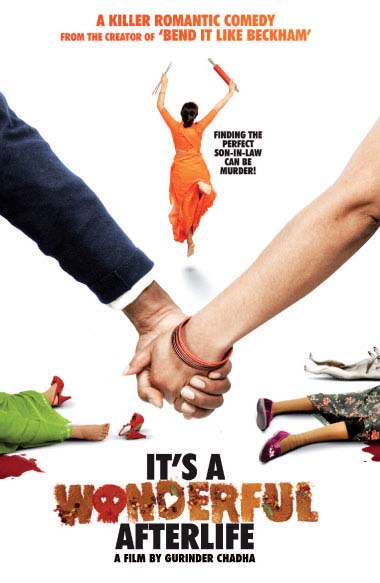 Experience the drama of love, marriage and serial murder as this years blockbuster, Its A Wonderful Afterlife releases in the UK and Ireland on April 21st.

Brought to you by the makers of Bend it Like Beckham, the brand new supernatural comedy is a comic feast, which takes the phrase I could murder a curry to hysterical new heights.

Award-winning director Gurinder Chadha is back to tell the story of Mrs Sethi (Shabana Azmi), a serial curry killer whose match-making efforts turn deadly when she tries to marry off her daughter, Roopi (Goldy Notay). A dramatic police hunt for the murderer begins in Southall as Mrs Sethis race to find a husband for her daughter continues.

Reflecting on the film, Chadha said: I started making movies because I wanted to see more people that looked like me or my community on our screens and It’s A Wonderful Afterlife represents me taking those images and putting them into a genre we, as Asians could never imagine we could see ourselves in. When I was growing up, we never saw Asians on TV never mind the Western movies, my work has been about making us mainstream and now I have helped achieve that, I want to have fun with it.

Building on Chadhas record for discovering new talent, the main lead is played by the newcomer, Goldy Notay, who will next be seen on the big screen in Sex and the City 2.

It’s A Wonderful Afterlife has been produced and directed by the BAFTA and Golden Globe-nominated Chadha, who has also written the screenplay with her longstanding writing partner and husband, Paul Mayeda Berges. Chadha’s body of work, including Bhaji On The Beach, Bend It Like Beckham, Bride & Prejudice and Angus, Thongs and Perfect Snogging has found her international acclaim and made her a popular household name around the world.

The film is coproduced by the AIM-listed The Indian Film Company (TIFC) and Bend It Films in association with Studio 18, India’s leading motion picture company.

IT’S A WONDERFUL AFTERLIFE is released in cinemas across the UK by Icon Film Distribution on 21st April 2010. Certificate and running time TBC.