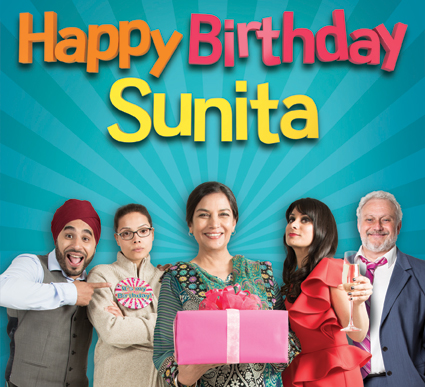 Regarded as one of India’s finest actresses, Shabana Azmi will head the cast and play Tejpal, the matriarch of the Johal house. Shabana’s illustrious career spans four decades, she is a multi-award winning actress including five National Film Awards for Best Actress and has starred in over a hundred films, including Mira Nair’s The Reluctant Fundamentalist and Deepa Mehta’s Midnight’s Children. Shabana is embarking on her first UK theatre tour for Rifco and Watford Palace Theatre.

As Tejpal’s son Nav, Ameet Chana once again takes to the stage for a Rifco production. Ameet has numerous stage, TV and film credits to his name including Adi Ferreira in Eastenders (BBC), Bend It Like Beckham, Run Fat Boy Run, East is East (Watermans), The Djinns of Eidgah (Royal Court Theatre) and Rifco’s Bollywood Yet Another Lovestory and Bollywood 2000. He appeared on the Watford Palace stage in Rifco Arts: A Celebration in 2011.

Newcomer Clara Indrani takes on the role of reclusive birthday girl Sunita. Clara trained at London Academy of Music and Dramatic Art where she performed in a number of productions. TV credits include Hollyoaks (Channel 4) and Gates (Sky Living).

Completing the cast is Russell Floyd as Maurice, the builder who has been renovating the Johal kitchen. Recent stage credits include Hangman (Tristan Bates), The Wing (The Arcola), Clockwork (HighTide Festival). Russell is also a familiar face on TV, having been a regular on The Bill (ITV) and Eastenders (BBC).

Directed by Pravesh, who has developed the show with actress and writer Harvey Virdi, Happy Birthday Sunita is set on the day of Sunita’s fortieth birthday. The Johals have come together to celebrate, Mum’s been working hard to make everything perfect, Nav and Harleen arrive bickering and Sunita is nowhere to be seen. As the curries simmer and rotis are smothered in full-fat butter, years of family drama bubbling under the surface start to boil over!

Happy Birthday Sunita is designed by Colin Falconer, with lighting by Mark Dymock and sound design by Nick Manning.

From the producers of Britain’s Got Bhangra, MummyJi Presents and Break The Floorboards, Happy Birthday Sunita opens at Watford Palace Theatre on 19th September then tours to Wolverhampton, Leeds, Oldham, Brentford, Colchester, Gravesend, Dubai and Mumbai.