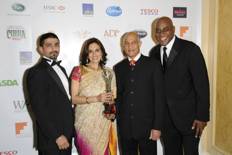 London, UK – Meena and Kirit Pathak, The Cinnamon Club, Sir Gulam Noon and Levi Root of Dragon’s Den fame are among the winners who were celebrated at the inaugural World Food Awards on Saturday 31st October at London’s Hilton Park Lane.

Restaurant of the Year
The Cinnamon Club

Winners were selected by a panel of industry experts including celebrity chefs Ainsley Harriott and Anjum Anand who were among those present to honour the best in the world food sector.

Recipient of the Lifetime Achievement Award, Sir Gulam Noon, founder Noon Products, said: "It is an honour to receive the Lifetime Achievement Award at the inaugural World Food Awards. Ethnic food has come a long way since Noon Products first launched many years ago and I am very pleased that we have been able to contribute to making the ethnic foods such a major international industry.”

Harry Dulai, of the World Foods Association said: "We couldn’t be more thrilled with the success of the inaugural World Food Awards.

“Our aim is simple – to ensure that ethnic food is recognised as the important sector that it is. The calibre of our winners this evening – from Levi Roots to legends of our industry like Sir Gulam Noon and Kirit and Meena Pathak – is a reflection of the fact world food is now a thriving and fast-paced industry that has long crossed over into
mainstream markets.”

Classic pop trio The Real Thing closed the show with their super hit single You To Me Are Everything, before guests were whisked away to the Halloween-themed after party featuring the musical genius of Katy Shotter.