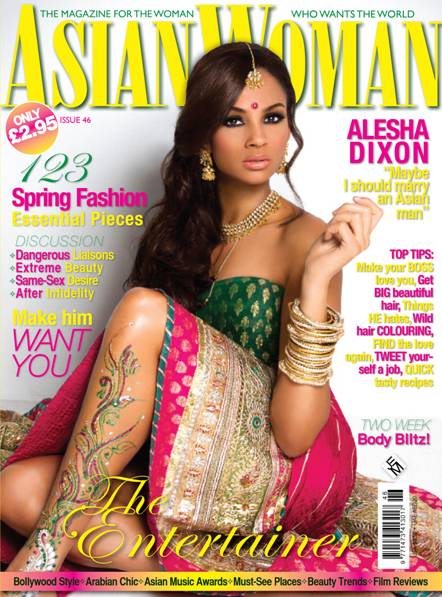 This season, the UK sees one of its best loved stars as never seen before. Bold, assertive, beautiful and successful – who better than Alesha Dixon to grace the cover of Asian Woman Magazine? A fusion of different styles, genres and cultures, Alesha’s Spring cover coincides with the release of her new single Every Little Part of Me, featuring British Asian star Jay Sean. The new single, releasing on Asylum Records on 27th February, will also feature a remix from Asian beat masters Culture Shock.

In a feature interview with Asian Woman Magazine, the successful singer and TV personality opens her heart about the Strictly Come Dancing controversy, the chemistry between her and Jay Sean, the split from Mis-Teeq, and her rollercoaster past.

Managing Director and Editor-in-Chief J Wimal said of the exclusive interview: Our Alesha Dixon cover marks a fresh direction for Asian Woman. As the market leader, we will continue to cater to our core audience through cutting-edge South-Asian fashion, beauty and entertainment, but there is an intense demand for this type of content in the mainstream and we are in a prime position to meet that demand.

Alesha Dixon adds: The Asian Woman Magazine shoot was one of the most creative shoots I have ever done. I absolutely adore South Asian culture and have recently performed in India. Having done the track with Jay Sean, a close friend of mine, I am delighted at the opportunity to further embrace the culture with this unique shoot for the magazine.

Alesha Dixon’s latest single Every Little Part of Me releases on 27th February and is available to pre-order from iTunes now. The video has already amassed over one million hits on YouTube.