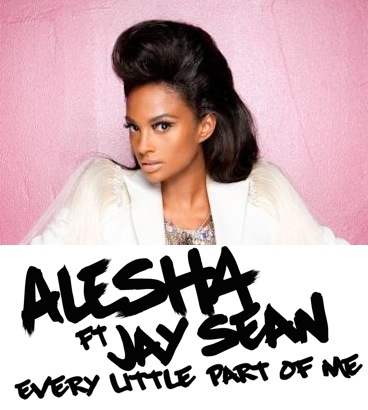 Alesha Dixon teams up with Jay Sean on her brilliant new single Every Little Part Of Me releasing February 27th through Asylum Records.

Every Little Part Of Me is a blisteringly powerful pop track. The song pairs jagged, can’t-get-out-of-your-head synth lines with thumping house beats, sexy vocals and a killer chorus.

Every Little Part Of Me was produced by The Fairground and features Jay Sean on guest vocals, one of the most in-demand men in music at the moment, fresh from his smash 2012 with Nicki Minaj and the first British urban male solo artist to ever have a Number 1 single in the US with Down in October 2009.  The song also knocked The Black Eyed Peas off the top spot after their 26-week reign and made Jay Sean the fourth British act to top the US charts overall that decade.

The accompanying video, also featuring Jay, has racked up a staggering 300,000 views in it’s first few days on YouTube. It was shot in Miami by Nick Frew (Pixie Lott "Gravity", "Turn it Up", Lily Allen) during bizarre freezing conditions in the tropical city!

The single follows Alesha’s recent singles, the sassy, stomping Drummer Boy and the stirring Radio. In November, the dazzlingly charismatic star collaborated with Roll Deep on their dance floor smash Take Control, while returning to our screens as a judge on Strictly Come Dancing. She also shone as co-presenter of the prestigious MOBO Awards and presented a moving documentary on domestic abuse, Don’t Hit My Mum, on BBC1.