Belle Amie team up with PMG for ‘Girls Up’ Desi Remix! 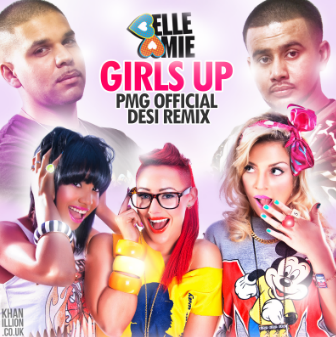 Belle Amie team up with PMG for ‘Girls Up’ Desi Remix!

The Belle Amie girls have teamed up with popular Desi hitmakers Pure Music Generals (PMG) to produce a seriously cool Desi mix of their brand new single Girls Up. The remix features Ravers and Ghengis from (PMG) and is set for release on Sunday 28th August. The remix is already catching the attention of DJ’s across the UK with DJ Bobby Friction of the BBC Asian network leading the way by exclusively spinning the track on his show this week.

Written and produced by U.S. heavyweight Chad Dexter (Rihanna, Beyonce, 50 Cent), Girls Up is true electro pop gem, which draws influences from classic 1980’s pop with a nod towards the synth laden sounds of that era. Other remixes include a dance brilliant mix by renowned producers Soulshaker. The song sees the girls promoting REAL women as they address the issue of young girls constantly being presented with images of ‘fake’ women that have had plastic surgery or are heavily airbrushed and ‘photo‐shopped’.

The video for Girls Up was shot in London and sees the girls in funky retro gear, tearing out of their doll boxes and breaking into robotic dance routines. It received over 155,000 hits in its first week of release on YouTube. Popular U.S. blogger Perez Hilton was one of the first to comment stating that it was a ‘hot track and a great vid’.

Belle Amie, which means ‘Beautiful Friends’, could not be a more appropriate name for such a talented and gorgeous group of girls. Consisting of singer / songwriters Esther Campbell, Rebecca Creighton and Sophia Wardman, Belle Amie were created by the revered X Factor judge Simon Cowell at the end of boot camp in last year’s competition, and went on to deliver some outstanding performances which saw them impress both the X Factor judges alongside millions of the program’s viewers.

Their vocals, style and captivating performances left industry guru Louis Walsh declaring them to be the next big girl band. This prediction seems to be turning into a reality with the girls already participating in a number of summer events including the London Gay Pride Parade and performances on TV shows such as ITV’s Daybreak scheduled later next month.

Girls Up is the debut single from Belle Amie and is released on Sunday 28th August.