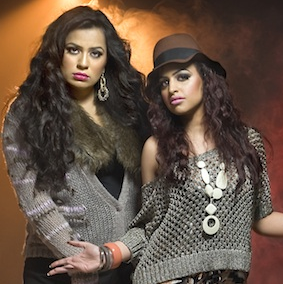 ‘Sound of the Underground’ To those unfamiliar with underground inspired electro-pop, this is RaRa Loud. Developing their own distinctive style, Anuska, and Jaya B began collaborating in June 2010, having remained close friends for over a decade. Having a clear vision of where they wish to take their music, the girls are driven by an ambition to produce music that listeners of all ages can identify with.

Anuska, a classically trained dancer from London, has previously owned her own dance school, bringing her choreography and performance skills into the mix. Her performing background started at the age of 5 and has since played a big part, she naturally loves to entertain.

Self-confessed wildchild Jaya B grew up in Birmingham, recognizing her song writing abilities at an early age. Much of Jaya B‘s inspiration for writing comes from seeing her mother work all hours to feed the hungry mouths of the family. Life was far from easy but this made her a strong character who fought for herself to be heard in a full house.

Despite their contrasting personalities, the two share one important thing in common – a passion for music. With their electric live performances bringing an energy and presence to the stage, these girls certainly have the goods to back it up. Inspired by a wide range of musical styles, the band count Destiny’s Child, Usher and Kings of Leon as some of the many artists that have influenced their sound. Acts of this genre have taken a back seat in previous years, but with groups such as N-Dubz and Tinchy Stryder rapping their way into the limelight, urban music is taking centre stage.