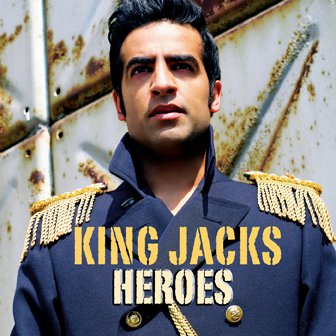 This prince charming’s ambitious pop reminds us of the brash, brilliantly bolshy quality of Adam Ant. The Guardian – Band of the Day

King Jacks will liven you right up! Nihal – BBC Radio1

There is something wily and knowing about this artist Steve Lamacq

King Jacks is a Rock ‘N’ Roll solo artist. He walks with the swagger that his Britpop heroes have paved the way for. Returning from Manchester, armed with a collection of songs whose lyrics relate to the common man at a time where the people of the world are already joining together, he unifies truth and empowerment as he chants his way through this indie anthem Heroes.

Backed by a tribal drum loop, a chorus of vocals and the hand claps behind him, he walks down the middle of the road with his lyric before leading us to a stomping climax that demand the hands in to the air!  Backed up by a double A- side I’m Not The One that yet again combines a roaring vocal with a pumping back beat, it seems that this ‘Born and Bred’ North Londoner has discovered the perfect combination of melody and beats! Indie and dance music! Manchester or London, this is Pure British Rock ‘N’ Roll!

As well as support from the likes of Lamacq, Nihal and The Guardian, King Jacks has also been supported by Strummerville, the Joe Strummer New Music Foundation.

Alongside the release of his album Please Everyone, Please Yourself, KJ has created a project called e11even. It is based around the 11 tracks on his album, where each of those tracks is represented by a remix, a photograph and a video, all by different artist. He has been co-ordinating this for the last six months and is almost at the end with remixes by The Nextmen, Losers, E.P.I.C., High Rankin, videos featuring Danny Dyer and Frank Harper, and photoshoots with Rock ‘n ‘ Roll photography legends, Mick Rock and Andy Willsher. The Nextmen Remix of Im Not The One is included on the debut E.P.

Grab yourself a FREE banging, epic LOSERS remix of debut smash single Heroes by King Jacks, head over to www.kingjacks.com for more information.

It’s the first of e11even remixes of King Jacks debut album Please Everyone, Please Yourself. 10 more to come!