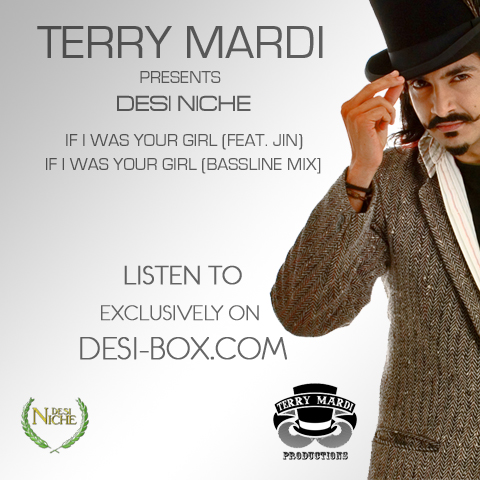 Terry Mardi the eccentric music producer and desi circus owner has teamed up with the world famous Niche Nightclub and Record Label to create a new entity and project having seen success with the already popular Bhangra Niche project.

The new project, Terry Mardi presents Desi Niche is a joint venture between Terry Mardi Productions and the “Home of Bassline”, Niche in Sheffield, England.

The single features the vocals of South Asian R&B singer Jin (for Terry Mardi Productions) and carries an urban sound with a bollyhood twist. Having sold over 200,000 copies of “Sounds of the Bassline” with Ministry of Sound, the new label have discovered a large Asian following and Terry Mardi’s demand has grown ten-fold since the beginning of 2009.

The brand new debut single from the revolutionary album aims to bring a world class music production to the world of Niche music which is a huge underground scene attracting tens of thousands of clubbers to Leeds, Sheffield, Birmingham and now the Balearic Islands such as Ibiza, Aiya Napa and Faliraki. But for the Bass heads, Terry Mardi and his mute band the “Bhang Bros” have delivered a Bassline House version for you to jump to.

Steve Baxendale (owner of Niche nightclub) is “very proud of the Desi Niche album” and Terry Mardi is excited to have created a new genre to bridge the gap that desi’s have been craving for. He says “It gives me a chance to show that we can create good music without compromising our identity”. The new sound is more diverse than the original Bhangra Niche releases where Moss Da Boss and our team worked to put a primitive mash up of bollywood/bhangra with dirty basslines. Desi Niche is very much a thunderous album that contains humour and rollercoaster style dance beats partnered with a mixture of Desi and Middle Eastern influences, it goes beyond bassline music and captivates R&B, HipHop, Electro House, UK Funky and many new styles that reflect the ‘True Sound of British Night clubs”.

The album contains many new artists, Kockee (rapper), Jin (Brit-Asian Female R&B singer) and Asian girl group Serese on a crazy track which invites the girls into the twisted world of Terry Mardi’s mind…. but the album also features veteran of Bhangra such as Labh Janjua.<