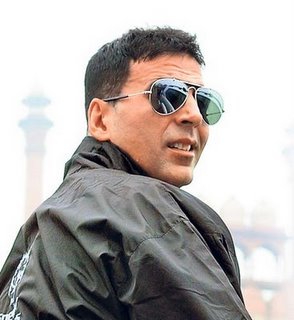 London, He has done loads of action films and made audiences laugh in rib-tickling comedies, but Bollywood star Akshay Kumar now says he’s bored and wants some romance…on screen of course!

“I want to do more romance. I’ve actually gotten bored of comedy and action. Yes, I just want to do some romantic films. And that’s what my next thing is going to be,” Akshay told Myleen Klass in an interview for CNN’s “The Screening Room Xtra” programme.

“…I’ve done quite a lot of comedy now and I don’t know…sometimes an actor is very sensitive about what he’s doing and where he wants to go ahead and do. I know comedy has worked a lot and it has worked brilliantly for me.

“Earlier, when I used to do action I would never think about comedy and then I started getting into it and I was quite successful. So now I’ve never done a complete romantic film. I did ‘Dhadkan’, which was eight years back. But now I wanna get into it and do at least two or three romantic films now,” said the actor, who entered Bollywood in 1991.

One of the highest earning members of the Hindi film industry, Akshay maintains that there is no sure-shot secret to success, but stressed that hard work and being “a producer’s actor” is essential.

“It’s actually your hard work, your punctuality…Even if you’re not a good actor, to be a producer’s actor is very essential…If you finish your films on time, save a lot of money for the producer. I remember there was a time when I had delivered 14 flops in a row. But I still had movies along with me for a very simple reason, because I was a producer’s actor.”

“I had good films still coming… I had finished all films in a three-month span. Even if they went for loss, they still preferred working with me. And after that, even I thought my career was over. But it still carried on,” Akshay added.

And luck, he said, is of supreme importance for remaining on top.

The actor also firmly believes that the blessings of his parents too go a long way in making him the star he is today.

“I would say my success lies at the feet of my parents because that’s been my biggest strength and that’s what we Hindus believe in. Every morning before going to work just touch your parents’ feet and go ahead in life. That’s my personal belief and I followed that in my life. And I told a lot of people and they have also been successful. People may believe it or not, but that’s exactly what I believe in,” Akshay said.