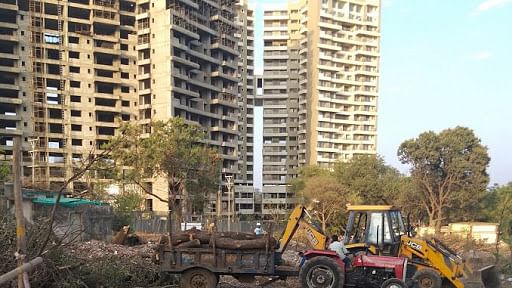 As many as 1,500 trees have already been cut down, and another 4,500 are in the line, however, now following the direction of the green tribunal, the felling of these thousands of trees have been put on hold till further order.

“It has been contended by the counsel for the applicant that in the map attached to the EIA (environmental impact assessment) project report shows that places like stadium and dussehra maidan have been included as area for development of green belt. In the meanwhile, we direct the parties to maintain the status quo as it exists today,” the bench said. The tribunal was hearing a plea filed by Green and Green Lawyers contending that there will be significant air and noise pollution problems due to movement of traffic in the area due to cutting of 1,500 trees which were acting as a buffer and reducing noise and dust pollution. The plea stated that T T Nagar Stadium and Dussehra Maidan are shown as green belt area in the smart city project however there plantation is not possible, informed Sachin Verma, one of the counsels of petitioner.

Without looking at the availability of land for plantation the other project proponent, Bhopal Municipal Corporation, in ‘sheer abuse’ of power simply granted permission for cutting down about 1,500 trees and yet another 4,500 trees are in line to be cut in near future, the plea further said.

As per the petition, 10 per cent green belt area of the layout of Bhopal Smart City should have been mandatorily available for the compensatory plantation of the native species of trees in lieu of 6,000 trees proposed to be cut. There were 1,500 trees of various species and sizes cut without exploring the possibility of translocation in order to achieve the goal of Smart City Project, said the petition, adding that the respondents were seeking to destroy the entire green belt and to achieve the said purpose were removing the trees from the said plots of land and thereby destroying all trees on the said green belt which acts as a buffer against vehicular pollution.

For the Rs 3500 crore smart city project, the Central government contributes Rs 100 crore every year and the state government has to add the equivalent amount. In 5 years, the total amount would be Rs 1000 crore (Rs500 each from central and state governments). The remaining Rs2,500 crore has to be managed through other sources.

Stay on project having environmental issue only: BMC commissioner

BMC commissioner Vijay Dutta clarified the stay is not on the entire project of Smart City. “There are many developmental projects under smart city. Only the project having environmental issue has been put on the stay. We will clarify the matter before NGT,” the official said. Smart City CEO Deepak Singh said he is yet to see the copy of NGT order and would reply after studying it.