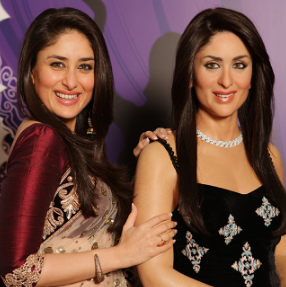 Bollywood beauty Kareena Kapoor was greeted by over 1000 fans at the unveiling of her Madam Tussauds wax figure in Blackpool today.

Dressed in a traditional sari, she arrived with her mother Babita, and was welcomed by Bollywood dancers. The wax work took over four months to create and cost over £150,000.

On seeing her wax work she gushed It is an honour and a privilege for me to have my own wax figure at Madame Tussauds Blackpool and even more so to launch a global Bollywood exhibition. This is a moment of pride for Indian cinema.

Kareena is India’s most sought after actress, after her last 3 films have become part of the top 5 Bollywood blockbusters of all time. Her wax work dress is based on the iconic look she had in the song Mauja Mauja, which featured in her blockbuster hit Jab We Met.

The unveiling of her wax figure also launched the global Bollywood exhibition by Madam Tussauds. The exhibition will also see wax figurines of Bollywood megastars such as Shahrukh Khan, Amitabh Bachchan, Salman Khan and Aishwarya Rai travel the globe to six major cities after Blackpool.

The special unveiling today coincided with her visit to the UK, for the London premiere of the Shahrukh Khan visual spectacle Ra.One, in which she stars opposite him.