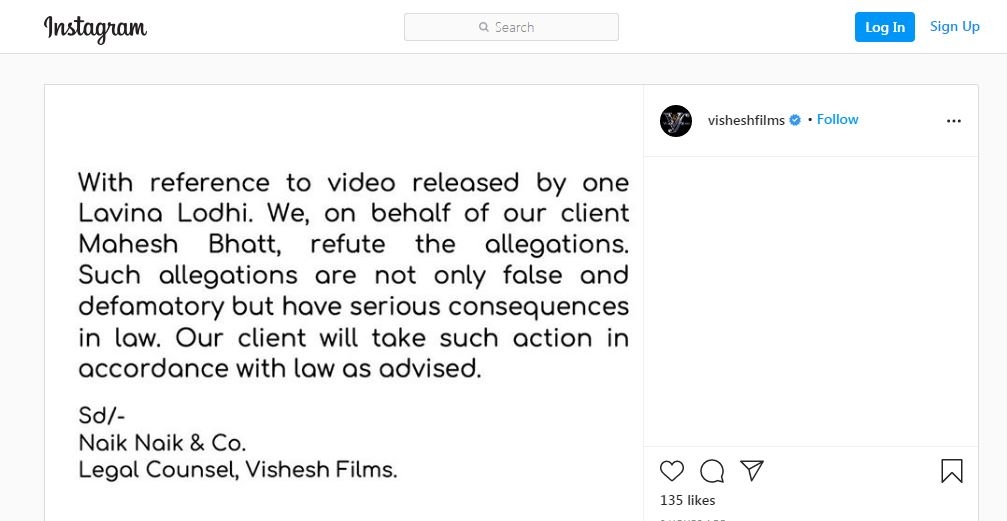 The legal counsel of Vishesh Films, on behalf of filmmaker Mahesh Bhatt, has issued a statement in response to an Instagram video uploaded by actress Luviena Lodh, alleging that Bhatt has been harassing her and her family.

“With reference to a video released by one Lavina Lodhi. We, on behalf of our client Mahesh Bhatt, refute the allegations. Such allegations are not only false and defamatory but have serious consequences in law. Our client will take such action in accordance with law as advised,” said the statement issued on behalf of Bhatt.

Earlier, on Friday, Luviena Lodh posted a one minute, 48-second video on her verified Instagram page claiming that Mahesh Bhatt has been harassing her. She also claimed that she had been married to Bhatt’s nephew Sumit Sabharwal, adding that she had filed for a divorce on getting to know that he supplies drugs to actors like Amyra Dastur and Sapna Pabbi. She also alleged that he was into supplying women and that Mahesh Bhatt was aware of the fact.

Speaking in Hindi, Luviena says in her video: “Namaste. My name is Laviena Lodh, and I’m filming this video for the safety of my family and myself. My marriage took place with Mahesh Bhatt’s nephew Sumit Sabharwal and I have filed for a divorce on getting to know that he supplies drugs to actors like Amyra Dastur and Sapna Pabbi etc. His phone contains images of numerous girls that he shows to directors, and so he also supplies women.

“Mahesh Bhatt is aware of these things. Mahesh Bhatt is the biggest don of the industry. He operates this entire system and if you don’t play by their rules they make life miserable for you. Mahesh Bhatt has destroyed many lives — he has ensured many actors, directors and composers lose their jobs. He makes a call and people lose their jobs, and they don’t even get to know about it. He has destroyed many lives in this manner, and since the time I filed a case against him he is after my life. He has tried to enter my home in different ways and has also tries his best to get me thrown out of my house.

“When I try to file an NC (non-cognisable complaint) at a police station, no one is willing to lodge the complaint. If at all an NC is filed, no action is taken. If something should happen to me and my family, the only people who are responsible are Mahesh Bhatt, Mukesh Bhatt, Sumit Sabharwal, Sahil Saigal, and Kumkum Saigal. People should at least get to know of how many lives they have destroyed behind closed doors and the things they can do, because Mahesh Bhatt is extremely powerful and influential. Thank you.”

Luviena Lodh had a role in the 2010 release “Kajraare” starring Himesh Reshammiya and Sara Loren. The film was written by Mahesh Bhatt and directed by his daughter Pooja Bhatt. 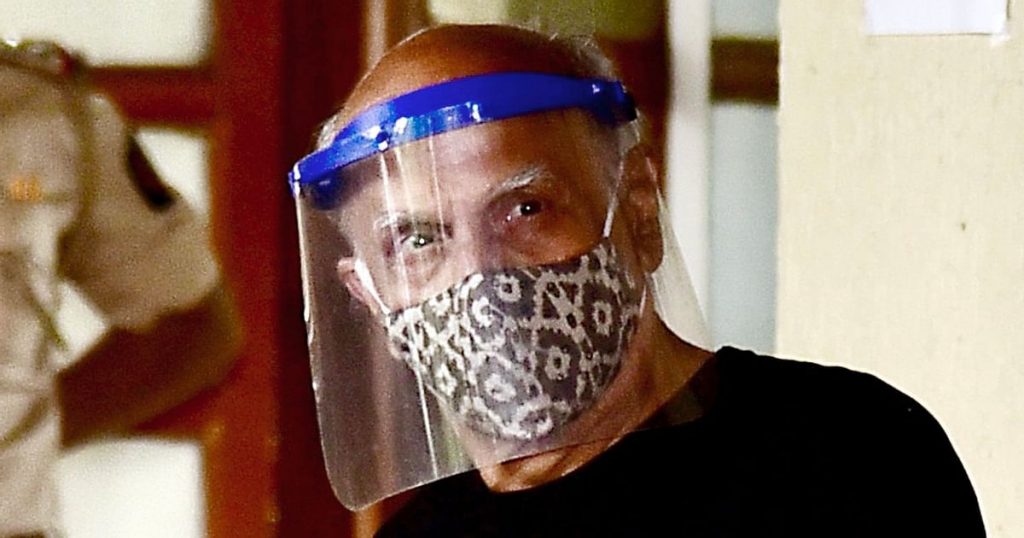