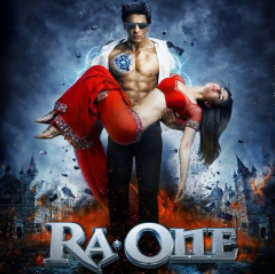 Shahrukh Khan has dominated the Bollywood film scene for the last 20 years, with now every film he leads in a guaranteed blockbuster hit. Ra.One; the most expensive Bollywood film to date, is truly no exception. The Red Chillies and Eros International venture has been in the making for the past 2 years, and is no doubt going to take the world box office by storm. This production had an army of a crew with over hundreds of individuals from across the globe working with endless effort to produce a superhero film that appeal to a universal audience. Their efforts have not been wasted. The film is a roller coaster ride witch action packed thrills, death defying stunts, and hilarious moments with a backdrop of family love. The film merges these key ingredients to create an entertaining family film.

The film revolves around Shekhar Subramaniam and his son Praetek. Prateek is a video games obsessed child who believes his father is too ‘uncool’ to be around. Shekhar on the other hands is an out of sync, clumsy but super intelligent quote fanatic that longs to impress his son. In trying to impress him, he creates a revolutionary game which blurs the line between the gaming world and reality and in turn causes havoc in the real world.

Shahrukh Khan gives a brilliant performance in his double role as Shekhar and G.One. Both the roles showcase the qualities of the Badshah of Bollywood that we all love to see on the big screen. Kareena Kapoor gives a great performance as Sonia Subramaniam in the film. Her chemistry with Shahrukh on screen is on point, but her character does not look like a mother to a 12 year old boy!

The star of the film is Armaan Verma, who plays the son in the film exceptionally well, considering this is his first role on the big screen. One point which crossed my mind is that it did seem slightly worrying that he had has an obsession with the devil! Arjun Rampal plays the villain to great effect as the menacing Ra.One. Sahaana Goswami does her role justice as the graphics designer. Supporting actors Dalip Tahil, and Tom Wu blend in the film well with their role especially Satish Shah with his comedic presence.

The main attraction of the film is no doubt the spectacle of the visuals. This film definitely pushes Bollywood milestones forward in the graphics and visual effects department. Furthermore the amount of research that has been gone into the game in the film is astounding. Cinematography in the film is exceptionally shot especially the latter half of the film.

Throughout the film there are various memorable scenes including the showdown at Battersea PowerStation, the adrenaline pumping train sequence and the hilarious comedic sequences at both Heathrow and Mumbai airports. Not forgetting the much talked about Rajnikanth cameo which pays homage to the southern action megastar, in which we even see Kareena throwing punches!

Musical duo Vishal and Shekhar have worked their magic with the music. The soundtrack is already adored by many especially the song of the moment Chammak Challo with the vocals of Akon. Dildara is also catchy as well as the solemn Bhare Naina. Kareena looks effortlessly stunning in the song Criminal and no doubt sizzles on screen in the dance number Chammak Challo.

Although the film is a visual treat, they were some loop holes in the script that created some illogical sequences especially in relation to language. For example that most of London can speak fluent Hindi as well as the robots themselves. Another point to mention is product placement. Given the mammoth budget of the film, product placement is expected and Apple as well as Tommy Hilfiger is heavily featured at various points in the film. It is refreshing to see a Tamil speaking character as focal point in the film rather than the Hindi or Punjabi speaking lead we usually have. However, this is mostly used for more comedic effect for the audiences.

The director Anubhav Sinha has drawn obvious inspiration from Hollywood Superhero films such as Iron Man, Tron Legacy, as well as Batman. But he executes the film perfectly ensuring the two and half hour film is an entertaining visual treat for this festive season. His direction ensures that when an individual watches the theatrical spectacle on screen, they are fully immersed into it and are almost experiencing the film rather than just viewing it.

Overall the film will no doubt change the face of Bollywood, pushing the visual effects to the next level as well as make box office history. The film is an ambitious project however the great cast, amazing soundtrack, jaw dropping graphics as well as the Diwali release timing will make sure that we will be talking about the film for a long time.

Desi-Box definitely recommends you to experience the RA.One phenomenon.