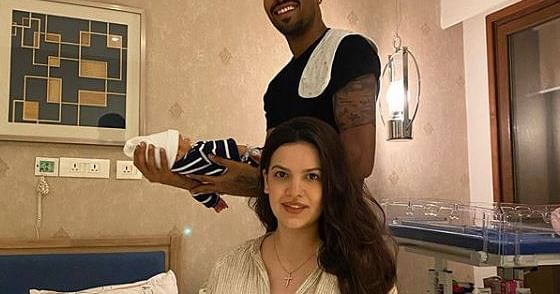 Serbian dancer-actress Natasa Stankovic has shared a picture of her boys and has called them her world.

Natasa has posted an Instagram picture where she is seen along with her fiancÃ©, Indian cricketer Hardik Pandya. While Hardik cradles their newborn son, Natasha sits in the foreground of the frame holding a bouquet of red roses.

“My family (heart emoji) my (world emoji) @hardikpandya93 #blessed #grateful #myboys,” she wrote alongside the picture, which currently has 567K likes.

Pandya dropped a heart emoji on the picture.

The couple welcomed their baby boy on July 30. Pandya had announced the news on Twitter with this post: “We are blessed with our baby boy.” It was posted with the picture of the baby’s hand. The delivery happened in Vadodara.”

Earlier this year, Hardik had announced his engagement to Natasa via social media as well. On January 1, Hardik had shared an image of him proposing to Natasa and had captioned it: “Mai tera, Tu meri jaane, saara Hindustan. 01.01.2020 #engaged.”

Subsequently, the duo had announced in May that they were expecting a third member in their family.