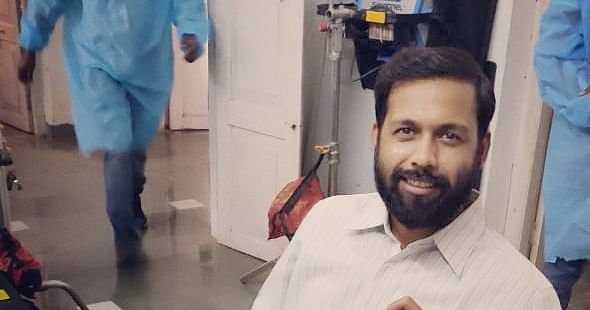 The shooting area was divided into three zones — A, B and C — with people working in one zone not allowed to enter the other zones. They communicated through walkie-talkies. The idea was to ensure social distancing.

“I held auditions for the local artistes to be featured in the films. Unlike earlier times, when there used to be a crowd during the auditions, this time, there were just the two of us — the interviewer and the interviewee — in the room,” he said.

A total of 70 artistes from Balaghat, Jabalpur and Bhopal were hired for the film, with 15 of them getting substantive roles.

“Earlier, the practice was to allow local artistes to go home after the day’s shoot. But, due to Covid fears, we arranged for lodging and food for them and ensured that they stayed with us during the entire duration of the shoot,” he said.

The crew and the cast had to undergo Covid tests quite frequently. “I was tested at least seven times during the one-month shoot,” he said. Each day, only those who had something to do were allowed on the sets. The others were asked to relax in their rooms.

The sets were sanitised every 10 minutes. And, when they went to the villages on any errand, they carried masks with them. “If the person we wanted to talk to didn’t have a mask, we presented him with one and only then did the conversation begin” he said.

Rawat, who has been casting in-charge for many films, web series and ads, said that, over time, they all got used to the new protocol. “So much so, that when we weren’t wearing PPE kits, we felt something was amiss,” he said.