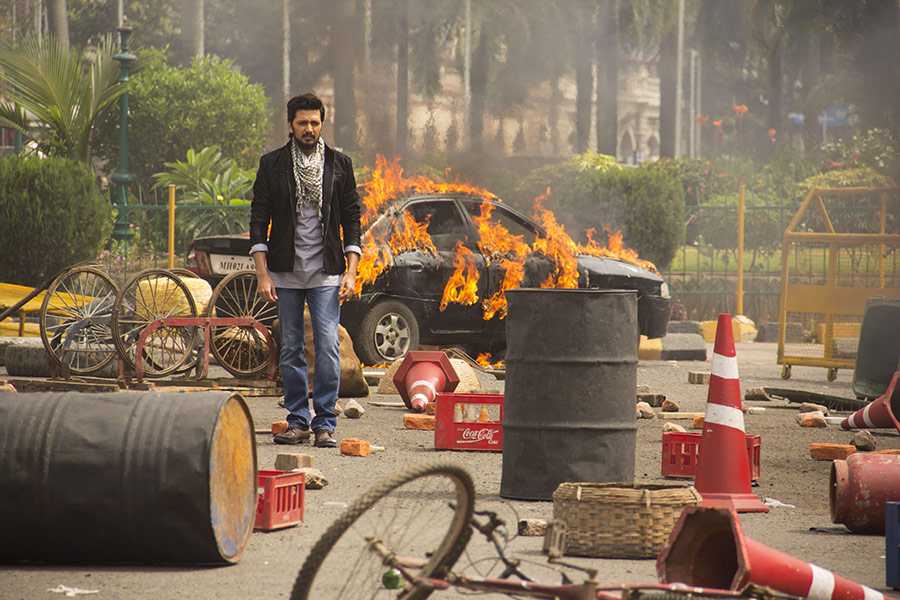 Desi-Box recently caught up with Riteish Deshmukh to talk about the much hyped ‘Bangistan’.

Q: Tell us about Bangistan?

A: Bangistan is basically a comedy satire about two terrorists that are on a mission to save the world. They are brainwashed by local religious rag-tags and sent on a mission to disrupt the world peace conference taking place in Krakow, Poland. On this journey they realize the futility of religious divide, and come out as Heroes.

I play a Muslim from North Bangistan called Hafeez bin Ali, an introspective young man who has been brought up with an ultra-conservative Muslim background, where he works unhappily at a makeshift call center. He is frustrated by the stereotyping of Muslims throughout the world, and is a passive member of Al-Kaam Tamaam, a ragtag Islamic terror group of young Muslims, headed by the wily Abba Jaan. For this mission, Hafeez takes on a masked identity as a Hindu and trains for it accordingly.

As a country Bangistan is unique and fictitious, but the topic and the issues are real; it has a strong underlying message highlighting the futility of violence, religious divisions, cultural prejudice.

Q: What kind of comedy can we expect?

A: There are a lot of satirical jokes in the film as well as many spoofs. For example, ‘Star*sucks Coffee’ is there instead of Starbucks Coffee.  ‘Keep Calm, I Am Not A Terrorist’ T-shirts are also present and  McDonalds is replaced with “FcDonalds-Killer Fast Food”, and the statue of Mcdonald is replaced with that of a terrorist.

Q: Who will this film appeal to most?

A: I think it will have universal appeal perhaps with a bias towards the youth or millennial audience or more vocal.

Q:  What is the secret of delivering a great comedy performance?

A: I think that if you rehearse your comedy too much, then your performance will appear robotic and over practiced. So I think its better to just go with the flow and see how the situation is and act accordingly.

Q: Why should we all go watch Bangistan?

A: If you want to have some laugh at loud moments that at the same time make you think about the anarchy in the world then Bangistan is for you!