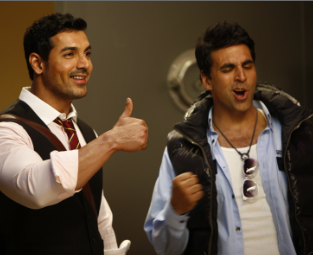 The two actors go back a long way after their partnership in Garam Masala -that went on to become the biggest Blockbuster of 2005.

Rohit Dhawan promises to bring the house down with the coming of age comedy that traces the lives of two young lads who refuse to grow up.

Talking about reuniting the Garam Masala duo says Rohit, Akshay was on board from day one, when I was still developing the story idea. A two-hero movie is never easy to write and it took me almost two years to put this project together. Once I felt I had justified the presence of both the protagonists, I took the script to John who’s been like a buddy since I worked as an assistant director on dad’s film, Hook Ya Crook (2010). He was convinced immediately.

Terming Desi Boyz as a “Dramedy” the film starring Akshay Kumar, John Abraham, Deepika Padukone and Chitrangada Singh breaks the norms of Bollywood comedies and contains no slapstick or over the top comedy

Both Akshay and John are extremely disciplined and professional. They were always on time and focused through the day, a dream team for any first-time director says Rohit talking about his first experience working with the two stars.