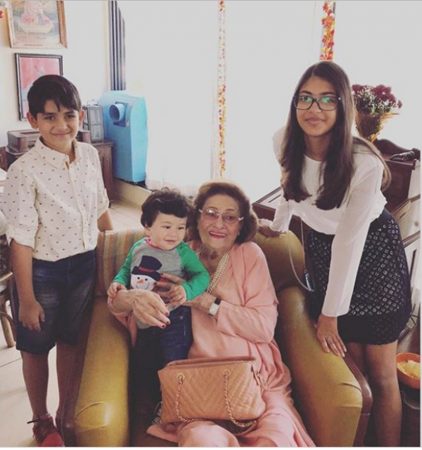 The loss of Krishna Raj Kapoor is something which the Kapoor clad is still finding it difficult to come to terms with. Raj Kapoor’s wife was not only the eldest member of the Kapoor Khandan but was also one of the most lovable person whom the whole Kapoor clad adore and admire.

Both Ranbir and Kareena have often spoken about their unconditional love for their Dadi. In a recent picture shared by Karishma Kapoor, it seems that Krishna ji was not only close to her grandchildren but was also fond of her great grand-kids.

In the picture we can see Krishna Raj Kapoor enjoying the company of his great grand-children, Taimur Ali Khan, Samiera Kapoor and Kiaan Raj Kapoor.

The picture was taken from their last year’s Christmas brunch, a festival which the Kapoor clad celebrate with lot of love and which is also a sort of get together for the entire Kapoor family.

Krishna Raj Kapoor, 88, was not keeping well for quite some time and died due to a cardiac attack on Oct 1. Apart from the Kapoor clad, a lot of Bollywood celebrities expressed their grief on Krishnaji’s death, truly she will always be remembered in everyone’s prayer.