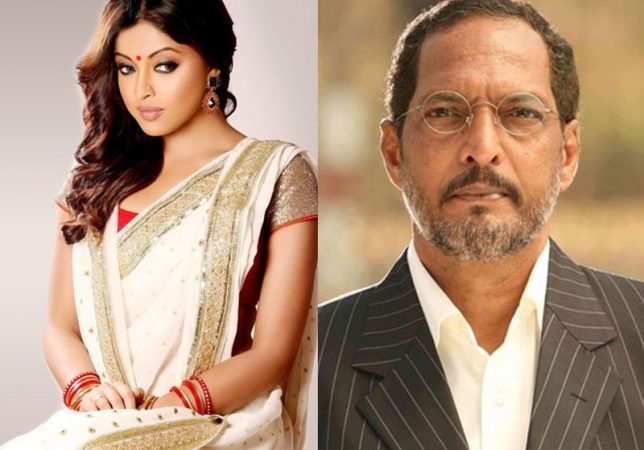 Tanushree Dutta, who stayed away from the world of Bollywood, is making news in media  for her latest revelations. With #MeToo campaign gaining momentum, it seems to have inspired the actress who has now made shocking allegations against veteran actor Nana Patekar. The actress accused the actor of sexually harassing her whilst they were shooting for a song ‘Nathni Utaro’ from the film Horn Ok Pleassss in 2008.

Though we saw Tanushree Dutta for a very little time in the song, but allegedly it was enough to start a big controversy. This song shows Nana Patekar and actor Muzammil Ibrahim in a desi Bar where they are seen doing boys stuff, Nana Patekar can be seen singing and dancing with actress Rakhi Sawant on an item number. This item song is filled with comedy, catchy lines and good dance steps. Though this song is full of fun,  but there is no scene of Nana Patekar and Tanushree Dutta together.

However in an interview with Times now the actor was asked about the allegations put on him by actress Tanushree Dutta , on which he said, ““What can I do about it? You tell me.”

When probed further, he went on to laugh, and say, “What does she mean by sexual harassment? There were 50-100 people on set with me [at that time]…”

Nana Patekar also said that he would see what he could do about it legally. “I’ll see, it’s a waste talking,” he said, adding that the media will “play up anything”.

Yesterday Ganesh Acharya slammed Tanushree’s allegations on Nana Patekar, and today filmmaker Rakesh Sarang comes out in support of Nana. Sarang alleged that Tanushree misunderstood the actions of the actor. According to his quotes that he has given to the media recently, Sarang has claimed that Tanushree Dutta misjudged everything including Nana’s encouragement. Rakesh Sarang has mentioned that he was shooting for a song after many years because of which he was just super excited. Furthermore, Sarang also asserted that no one would try to harass someone in front of 400 people.