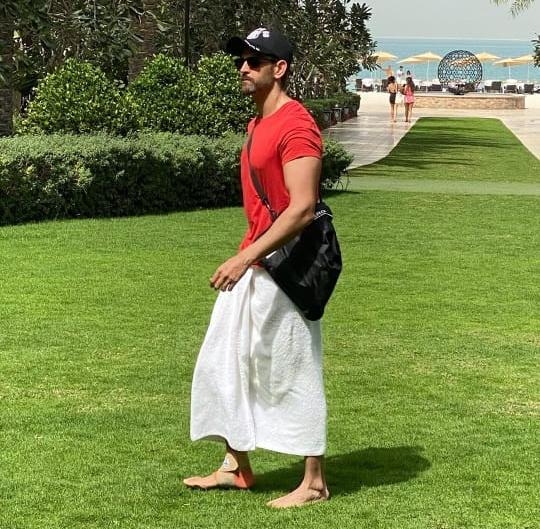 Hrithik, who is currently vacationing in Dubai, shared a couple of photos on Instagram on Monday afternoon. In the photos, he can be seen wearing a red tee along with a white towel that he has wrapped like a lungi.

While Ranveer Singh is yet to comment on Hrithik’s post, we are sure he is going to love it!

Of course, look at Hrithik’s pic closely and you understand the probable reason for his quirky dressing. In the photo, the actor has an injury on his right ankle which is covered with a bandage.

This did not escape the attention of Hrithik’s “Super 30” co-star Mrunal Thakur who expressed concern. Commenting below the actor’s post, Mrunal wrote that she loves the funny caption and added: “What happened to your foot?”

Commenting on Hrithik’s post, a fan called him “Fashion icon” while a user trolled him saying “Sanskaari Krish”.

Another user suggested that the actor is looking nice in his “lungi” and he should try his luck in South films.