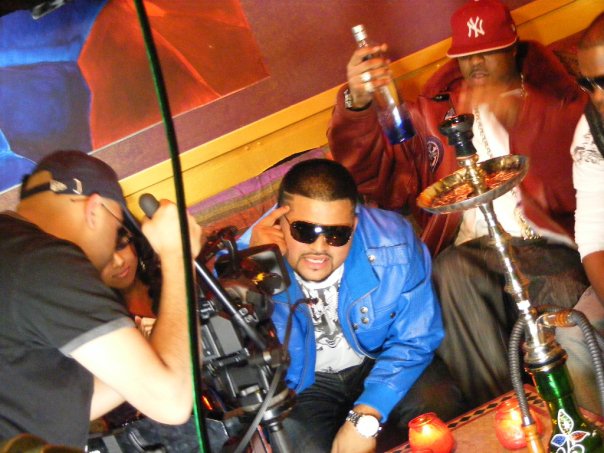 Punjabi artist G-Deep is ready to make the world dance with his international collaboration on ‘Nach Le’ with Hip Hop Legend Cappadonna of Wu Tang Clan and R&B sensation Senjay.

In the era of social networking, mergers and acquisitions, alliances and partnerships; it is through ‘music collaborations’ that the world will first become one. Regardless of the genre, music is a universal language. A language that builds bridges, closes gaps, amalgamates cultures and unites us on the dance floor. The Collaboration of Hip-Hop Legend ‘Cappadonna’ of the world famous ‘Wu Tang Clan’ with the Incredible Indian Recording Artist ‘G Deep’ and the enormously talented R&B Producer/Singer/Song Writer ‘Senjh’ (pronounced Sen Jay) does just that – “unites us on the dance floor.” Their combined musical talents fuse perfectly to form an unmistakable sound destined for chart topping success and platinum record sales.

The collaboration of these three incredible artists happened instantly, as if it was destined to be. Senjay of Senagy Music had worked with Cappadonna in the past; once Cappadonna heard what G-Deep and Senjay were working on in the studio, he was immediately impressed and wanted to work with them. ‘Nach Le’ which originally featured G-Deep and Senjay, was only enhanced by Cappadonna’s smooth hiphop elegance.

A little background on the three artists; Cappadonna of The Wu Tang Clan has been writing and performing rap lyrics since age 15. He made his record debut in 1995 by appearing on a huge hiphop artist: Raekwon’s album. From then on, Cappadonna became an official member of the legendary Wu Tang Clan and appeared frequently on many Wu Tang records. Cappadonna’s solo debut ‘The Pillage’ appeared in March 1998, the album successfully debuted at number three on the charts. After that Cappadonna released three more albums and has remained active in the studio. Currently, Cappadonna is working on his album The Pillage II, which will also feature the new collaborations with G-Deep and Senjay.

Senjay is a multi-talented producer, singer, songwriter, vocal producer, and engineer that exemplify the true definition of synergy.

Whether its Hip-Hop, R&B, Pop, or Rock Senjay is equipped with the heavy artillery of talents to blow his competition out the box. Just ask the award winning Swizz Beatz, Mobb Deep, Eddie F., Malik Pendleton, Jimmy Cozier, Kay Gee, DJ Premiere, Midi Mafia, Lee Carr of Jive Records, and now The Dey of Epic Records to name a few. Senjay was signed to Warner Music Group as an artist and received his first publishing deal with BMG PUBLISHING at the young age of 16. He’s currently in the studio with his production team and without question on his way to becoming the next household name.

G-Deep is a familiar name to the South Asian music industry. He is the first American Punjabi artist to be signed to Times Music of India. He is a triple threat of an artist, who writes, composes, and sings. G-Deep is a strong artist who is able to captivate his audiences through his live performances. His first debut album ‘Sher Punjabi’ has been a huge success all over. The single Sher Punjabi has brought a lot of fame n popularity to this young rising star. At the current time G-Deep is getting ready to finalize his second album which has more of a Hindi fusion feel. G-Deep has worked with many talented producers like Jimmy-Kanu of India, Ranbir S., and of course Senagy Music. G-Deep and Senjay’s team has created many hit tracks for G-Deep’s next album. G-Deep has already collaborated with a huge American Hip Hop artist – Mobb Deep on their sizzling hot track, ‘Mesmerizing Eyes’. Now this new collaboration with Cappadonna of The Wu Tang Clan will definitely add more substance to G-Deep upcoming album.

Finally, these three artists are beyond talented in their own unique genre of music. By working together, they’re making a universal statement and bringing the two cultures together. A music video for this single has already been shot on December 20th in New Jersey. The single and video will be released in January 2010. After the Oscar takeover by an Indian movie ‘Slumdog Millionaire”, the world is sort of familiar with the Indian culture and its sounds; however, with this collaboration Cappadonna, Senjay, and G-Deep will surely break racial barriers and let it be know to the world that music is universal and everyone should be united in harmony through music.