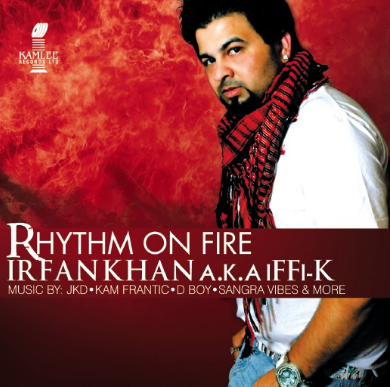 MovieBox Records proudly launches the Album RHYTHM ON FIRE by IRFAN KHAN a.k.a iFFi-K he’s Back!

After the super hit track from the last album Sohniyeh Teri Surat, IRFAN KHAN a.k.a iFFi-K returns with a brand new album titled Rhythm on Fire.

The album features 12 exclusive new tracks by the finest Music Producers from around the World. The visually stunning, fast paced video Munde Tere Utte Marde is the first of many videos to accompany this high profile release.

His singing career began just 8 years ago and his last album Sohniyeh Teri Surat ft Hunterz, was an instant hit and took the the U.K. Music Scene by storm. This success was the impetus for him to go onwards and to produce the new album Rhythm on Fire. The album is the culmination of two years work and extensive touring to work with the Worlds finest production and musical talent.

DOWNLOAD your copy of the album via iTunes below: