Shama sings in the ‘Baarish’ 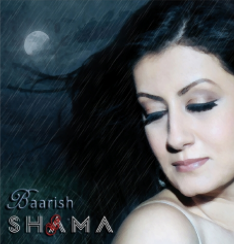 Shama sings in the ‘Baarish’

Last month, British Hindi singer/songwriter Shama brought some magic with Diljaani, an upbeat catchy number which was well received by radio and club DJ s nationwide. The track also earned her a spot as Bobby Friction‘s featured BBC Introducing artist. Shama is now back with a follow up, titled Baarish, before the year is up.

Baarish is both beautifully produced and sung, and is a romantic song which Shama has written. As with her previous track Diljaani, Shama has collaborated with The 515 Crew, a group of talented British Asian musicians who collectively are a live band and production outfit, lead by the musical direction of Hinal Pattani. He describes Baarish as a rich mix and fusion of the British and Indian sound, something which is becoming a 515 trademark.

The production talents are complimented by a strong Hindi vocal performance from Shama, who adds: Baarish is a personal favourite. I enjoy making all my songs but I feel this track really stands out from anything I’ve done in the past and as always, working with Hinal and the rest of The 515 has been brilliant. We are really starting to find our unique British Hindi sound and Baarish will offer the Asian music audience a great follow up to Diljaani . The release of Baarish will also include a darker remix of the original, with a heavy drum n bass production called the Monsoon mix.

Baarish, both original and Monsoon remix, will be available to buy from iTunes on 22nd December.