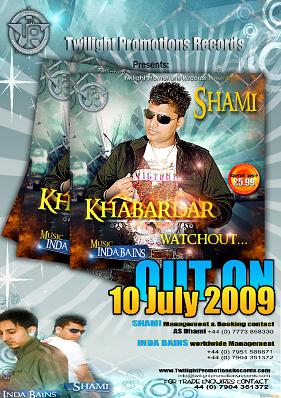 After the success of Bukan Jatt’s ‘Da Rite Tyme’ Twilight Promotions Records are pleased to announce their next Bhangra release, Shami – ‘Khabadar (Watchout)’ releasing in the UK this summer on 10th July 2009.

This is Shami’s second offering as a singer as he debuted with his solo album in 2008 entitled ‘Vekho Vekho’ with music by Aman Hayer. His latest release – ‘Khabadar’ is produced by the multi-talented Inda Bains who follows on from his debut as a music director and producer on Bukan Jatt’s latest album ‘Da Rite Tyme’.

From Leicester, UK, singer Shami has been inspired and influenced by great Panjabi talent such as Sardool Sikander and Durga Rangila. He is hoping to establish his name and get his vocal talents recognised across the Bhangra market and by teaming up with Inda Bains and Twilight Promotions Records plans are under way for ‘Khabadar’ to be marketed across the world. He has spent the last 8 months preparing the album with Inda Bains, ensuring they get the right sound to appeal to Panjabi audiences globally.

The Bhangra album features 9 tracks consisting of a mixture of sounds and influences, including Folk and Hip Hop. Only in his early-twenties, Music producer and director, Inda Bains, presented his talent for Panjabi Folk manner on Bukan Jatt’s album and now brings a fresh dimension to Shami’s project. With good knowledge of music production and being able to play his own instruments, Inda has implemented new sounds on the album, showcasing his diversity.

The project is supported by 2 high budget videos which have been shot in India for the tracks ‘Nishani’ and ‘Yaari’. The first track to be promoted will be ‘Nishani’, a Hip Hop flavoured track with youth appeal. The video to ‘Nishani’ will make its TV and online debut in late June and the track will be circulated to all UK Asian radio stations in the next few weeks.

‘Khabadar (Watchout)’ by Shami will be releasing across the UK 11th July 2009 and is now available for pre-order in the UK and Europe. Please contact Twilight Promotions Records on +44 (0) 7904 351372 to book your advanced copy

WATCHOUT for further information and updates on www.twilightpromotionsrecords.com and other online sites and social networks in the coming weeks.