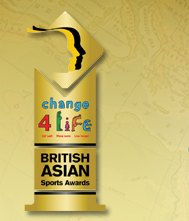 Nominations for the Change4Life British Asian Sports Awards 2010 are now open!Could you be the next Amir Khan or Ravi Bopara?

Is your coach as cool as Jose Mourinho? Do you know someone who has made a positive impact to the community through sport?

If so, the Change4Life British Asian Sports Awards want to hear from you!

The organisers of the Change4life British Asian Sports Awards are once again on the hunt for the UK’s brightest and most promising South Asian sporting talent.

Budding sports stars including their coaches are being invited to enter themselves into the nominations process. From chess players and kick boxers to cricketers and footballers, the organisers are seeking for the best in each of the awards ten categories.

All nominees will be judged by a panel of experts including, C4L BASA Ambassador and English cricketer, Mark Ramprakash; Evening Standard Sports Editor, Mihir Bose; the skipper of the first all female crew to sail around the world in the Whitbread Round the World Yacht, Tracy Edwards (MBE); Olympic gold medal winner Denise Lewis, OBE; Ambassador for The FA in their ‘Get into Football’ Programme as well as Trustee – Sporting Equals Lorraine Deschamps & Executive Vice-President for International Business, Sony Entertainment Network, Rajan Singh.

Once the lucky few have been selected by the judges, it is down to the public to decide who will be crowned winner for each category.

The shortlisted finalists will have the opportunity to attend the glamorous awards ceremony due to take place on Saturday 6th February 2010 at the Grosvenor House Hotel, Park Lane, London where they will have the chance to rub shoulders with industry leaders, sporting celebrities and a host of VIPs.

Now in its tenth year, the Change4life British Asian Sports Awards is the only awards programme of its kind and prides itself on acknowledging and celebrating the current British Asian sporting talent and aims to motivate and inspire the next generation of talented British Asian sports people across the United Kingdom.

The deadline for the British Asian Sports Awards 2010 nominations is Friday 18th December. So if you know someone who is making waves in the sporting world and deserve to be recognised what are you waiting for? Log on to www.basauk.tv for application forms.